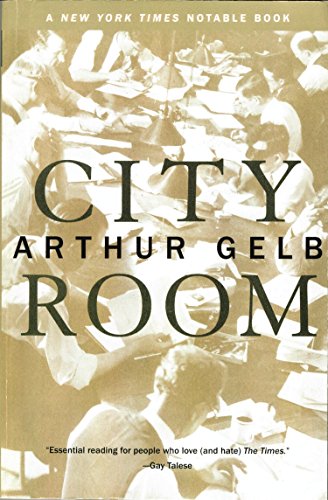 Arthur Gelb was hired by The New York Times in 1944 as a night copyboy—the paper’s lowliest position. Forty-five years later, he retired as its managing editor. Along the way, he exposed crooked cops and politicians, mentored a generation of our most-talented journalists, was the first to praise the as-yet-undiscovered Woody Allen and Barbra Streisand, and brought Joe Papp instant recognition. From D-Day to the liberation of the concentration camps, from the agony of Vietnam to the resignation of a President, from the fall of Joe McCarthy to the rise of the “Woodstock Nation,” Gelb gives an insider’s take on the great events of this nation's history—what he calls “the happiest days of my life.”

Arthur Gelb knows the newspaper business. He began working at The New York Times in 1944 as a night copyboy; he retired 45 years later as the managing editor. In this absorbing memoir, he writes lovingly of the days when the sound of manual typewriters filled the air, spittoons were standard furniture, and two bookies worked the city room. Though much has changed, core elements of the paper's culture remain, particularly the intense competition which initially fueled his own curiosity and ambition. For instance, after being on the job for just a month, Gelb and two other copyboys started an in-house newsmagazine that allowed them to learn about the business and to interview everyone at the paper, from the publisher on down. He even used it to publicly request a promotion for himself. (It worked.) Gelb obviously loved working at the paper and his enthusiasm is apparent throughout, whether recalling the thrill of his first byline, describing how significant stories were covered, or discussing how they dealt with mistakes and errors in judgement. Loaded with anecdotes and fascinating gossip, his book is as much a history of second half of the twentieth century as it is a history of the Times. He writes about the colorful characters on the staff, of the many editorial battles, and of the significant cultural changes that took place at the paper as well as the in the country. "Can you imagine what it was like for an editor to arrive at work each morning, to look up from his desk at a sea of the most talented reporters in the newspaper world?" he writes. After reading this book, you can. --Shawn Carkonen

Arthur Gelb began as a copy boy at the New York Times in 1944 and went on to play a major role at the paper until his retirement in 1989, serving as a critic, chief cultural correspondent, metropolitan editor, deputy managing editor and managing editor. With his wife, Barbara, he also authored two definitive and acclaimed biographies of the playwright Eugene O’Neill.