Items related to In Too Deep (Elite)

Banash, Jennifer In Too Deep (Elite)

In Too Deep (Elite) 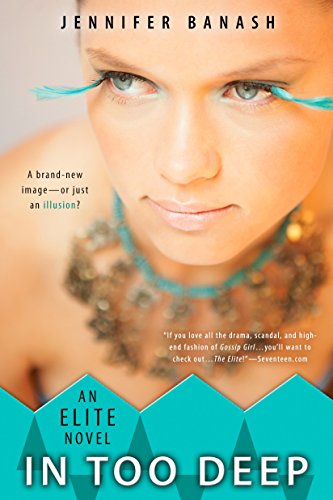 The Bramford building's newest resident and small-town transplant Casey McCloy is adapting to life in the Big Apple and loving it. She's got the look, the attitude, and a delish new boyfriend, Drew Van Allen. But she's starting to have second thoughts as to whether the "New York" Casey is the real Casey. And she's not so sure she likes herself much anymore. She's not the only one.

Madison Macallister has always had her Manolo Blahniks firmly planted on the top rung of the social ladder-until that corn-fed cow Casey stole Drew away from her and made her look the fool. So what if Madison wasn't exactly dating Drew at the time? She wanted him. And everyone knows that Madison gets what she wants, like Drew-and a little revenge.

Jennifer Banash lives and writes in Los Angeles, California, with her partner, Willy Blackmore, and their daughter, Story. She is the author of several works including White Lines, Silent Alarm, and The Elite.

welcome to the real world

get the party started

This book is an original publication of The Berkley Publishing Group.

This is a work of fiction. Names, characters, places, and incidents either are the product of the author’s imagination or are used fictitiously, and any resemblance to actual persons, living or dead, business establishments, events, or locales is entirely coincidental. The publisher does not have any control over and does not assume any responsibility for author or third-party websites or their content.

No part of this book may be reproduced, scanned, or distributed in any printed or electronic form without permission. Please do not participate in or encourage piracy of copyrighted materials in violation of the author’s rights. Purchase only authorized editions.

In too deep / Jennifer Banash.—Berkley JAM trade paperback ed.
p. cm.
“An Elite Novel.”
Summary: While Madison ponders revenge and a possible modeling career, Casey fears she has lost
herself by adapting fully to luxurious New York City life, and Phoebe keeps a secret, Sophie seeks to
bring her birth mother to her sixteenth-birthday party.

I’d like to thank Kate Seaver, my wonderful editor at Berkley, who took a chance on an unknown kid; my agent, Jennifer Jackson, who always has my back; and Willy Blackmore, who read every draft and kept me sane through the entire process. To all the YA bloggers and teen reviewers everywhere—thanks for getting the word out and making my books matter—I am eternally grateful. And, most of all, I’d like to give a huge shout-out to all the readers of The Elite series—you are the reason I sit in front of a computer for hours at a time, dreaming up what comes next.

Madison Macallister straightened the silken sleeve of her floral-patterned black and crimson wrap dress, and stabbed her fork into the desiccated remains of her smoked salmon salad, bringing a mouthful of baby greens up to her matte ruby-red lips. If she kept on eating this way, she was definitely going to blow up—and not in a good way. She was already changing into her baggy sweats the second she got home from school every day, and the waistband of her favorite new Citizens of Humanity jeans was decidedly snugger than when she bought them in a depression-fueled shopping incident a few weeks ago—a binge of Posh and Becks-worthy proportions that resulted in Edie storming into her room and cutting up her Amex Black card right in front of her. Madison exhaled deeply, spearing the last hunk of salty smoked fish and popping it into her mouth while checking out the six-carat square-cut emerald ring that shone brilliantly on her ring finger, winking in the fluorescent lighting. It had been worth it.

Besides, now that she was more miserable than ever, it seemed crucial to have a few things in her life that actually gave her pleasure—and shopping was definitely one of them. Drew may have been history, but at least she had her new black leather Furla tote trimmed in the softest gray fox fur ever to console her. Madison was beginning to see that boyfriends came and went with alarming speed, and friends were clearly not to be trusted. But clothes? Clothes never let you down. And accessories were forever . . .

It had been three weeks since Drew’s party—three long, agonizing weeks as the leaves in Central Park began turning orange, then red; the nights growing progressively cooler. More often than not, Madison found herself reaching for a sweater to throw over her shoulders in the early mornings, and pulling her caramel-colored Hermès riding gloves over cold hands that felt more like icicles than fingers. And even though the weather was definitely changing, things between her and Drew were not. Much like the first chilly days of winter—which were definitely now on the way—their relationship had completely frosted over. When they passed each other in the hall, Drew dipped his eyes away from her gaze and stared at the floor—especially if he happened to be walking with Casey. It had gone on for so long now that even if for some bizarre reason they did end up talking again she wouldn’t have the faintest idea what to say. Somehow—at least for her anyway—it was easier this way. Out of sight, out of mind—just like her credit card bills.

And if she wasn’t thinking about the way he’d clearly dumped her for Casey, she didn’t have to deal with the fact that he might just prefer someone else to her. But, no matter how hard she tried, Madison just couldn’t wrap her head around the idea. How was that even possible? And the only thing that even remotely put a crimp in her plans to pretend they’d both been inexplicably eaten by dinosaurs was the fact that she had to see the both of them every fucking day at school. And, worse yet, Drew didn’t even seem to care—it was as if their entire past had been wiped out with the arrival of one frizzy Midwestern freak with absolutely zero sex appeal, and who, despite her town of origin, was anything but “normal.” Did the last two years mean nothing to him? Not only was this turn of events totally inconceivable, it was ruining her reputation! Everyone south of Park Avenue knew that Madison Macallister was the girl who got what she wanted—when she wanted it—and boys were no exception. Until now.