Items related to Between Two Fires 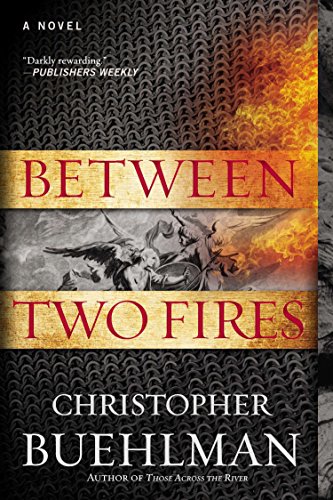 “Buehlman...slips effortlessly into a different kind of literary sensibility, one that doesn’t scrimp on earthy humor and lyrical writing in the face of unspeakable horrors.”*

The year is 1348. Thomas, a disgraced knight, has found an orphan of the Black Death in a Norman village. An almost unnerving picture of innocence, she tells Thomas that the plague is only part of a larger cataclysm—that the fallen angels under Lucifer are rising in a second war on Heaven. But is it delirium or is it faith?

She believes she has seen the angels of God. She believes the dead speak to her in dreams. And now she has convinced the faithless Thomas to shepherd her across an apocalyptic landscape to Avignon. There, she tells Thomas, she will fulfill her mission. There her true nature will be revealed. And there Thomas will confront an evil wrestling for the throne of Heaven, and which has poisoned his own soul.

Christopher Buehlman is the winner of the 2007 Bridport Prize for Poetry and the author of three novels and several plays. He spends half the year in St. Petersburg, Florida, and the rest on the road.

Thomas was a knight in mid-14th-century France before war, betrayal, and the Black Plague reduces him to banditry. But his road to oblivion in a nearly dead world ends with meeting Delphine, a young girl speaking with the voice of what may be angels‚--ěshe could be a saint, or a witch. Thomas can't ignore his compulsion to join her quest to go to Avignon, home of the pope, undertaken for reasons unknown even to her. But they and their companion Pv(r)re Matthieu don't realize they're trapped in a cosmic battle between good and evil, God having withdrawn from the world and Lucifer bent on filling the vacuum. until nightmarish creatures rise up everywhere to stop Delphine. Buehlman's (Those Across the River) medieval world is detailed with both sweet-smelling air and the gory results of plague, brutal but where hard-won small victories may add up faster than vast defeats. Thomas is the perfect everyman whose virtuous and sinful sides war internally as much as his sword arm battles in the physical world; Delphine is equally well drawn, part prophet and part frightened child. Fans of historical fantasy and horror will find this epic darkly rewarding.