Items related to The Shadow's Heir (The Risen Sun)

The Shadow's Heir (The Risen Sun) 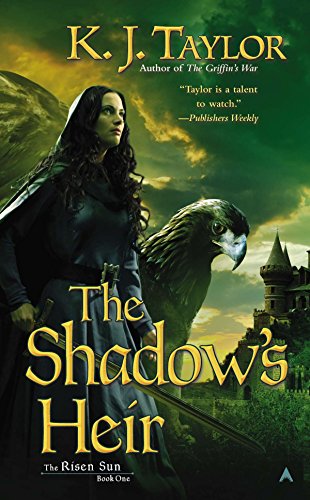 Laela Redguard was born with the black hair of the Northern kingdom and the blue eyes of the Southern people, forever marking her as a hated half-breed child of both. When her only family tie is severed, the fierce and strong-willed Laela decides to leave her adoptive father’s home in the hopes of finding acceptance in the North, where the ruthless King Arenadd and the dark griffin Skandar rule.

While Laela’s Northern features allow her to blend into the crowds of the King’s seat at Malvern, she cannot avoid falling victim to a pair of common thugs. When a stranger saves her life and gives her a place to stay, Laela is shocked to learn he is Arenadd himself—a man said to be a murderer who sold his soul to the Night God—the King without a heart.

Arenadd is unsure what compels him to help this girl, but there is something about her that seems familiar, something he cannot remember—something that may rise up to banish the darkness forever...

Born in Canberra in 1986, Katie J. Taylor attended Radford College, where she wrote her first novel, The Land of Bad Fantasy. She studied for a Bachelor's Degree in Communications at the University of Canberra, and graduated in 2007 before going on to do a Graduate Certificate in Editing in 2008.

Praise for the Fallen Moon trilogy:

“An intricately plotted story that is full of imaginative characters.”—Night Owl Reviews

“Taylor is a talent to watch.”—Publishers Weekly

Book Description Mass Market Paperback. Condition: New. Mass Market Paperback. Laela Redguard was born with the black hair of the Northern kingdom and the blue eyes of the Southern people, forever marking her as a hated half-breed child of both. When her .Shipping may be from multiple locations in the US or from the UK, depending on stock availability. 368 pages. 0.159. Seller Inventory # 9780425258231