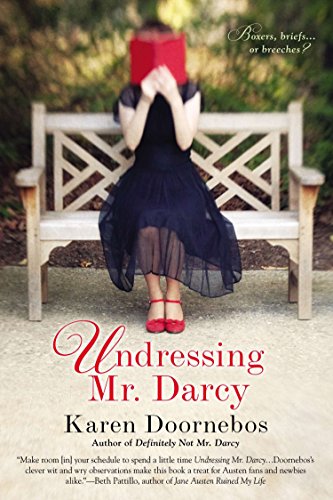 Taking it off in the name of history...

Thirty-five-year-old American social media master Vanessa Roberts lives her thoroughly modern life with aplomb. So when her elderly Jane Austen–centric aunt needs her to take on the public relations for Julian Chancellor, a very private man from England who’s written a book called My Year as Mr. Darcy, Vanessa agrees. But she’s not “excessively diverted,” as Jane Austen would say.

Hardbound books, teacups, and quill pens fly in the face of her e-reader, coffee, and smartphone...

...Until she sees Julian take his tight breeches off for his Undressing Mr. Darcy show, an educational “striptease” down to his drawers to promote his book and help save his crumbling estate. The public relations expert suddenly realizes things have gotten...personal. But can this old-fashioned man claim her heart without so much as a GPS? It will take three festivals filled with Austen fans, a trip to England, an old frenemy, and a flirtatious pirate re-enactor to find out...

Karen Doornebos, author of Definitely Not Mr. Darcy, now published in three countries, is an award-winning ad copywriter who happened to work in London for a bit. She’s a life member of the Jane Austen Society of North America, but she does have other interests, she assures you! Known to dress in gowns, pirate outfits and cop costumes in equal measure, she lives outside of Chicago with her husband, two teenagers, various pets, and a whirlwind of activity.

Praise for Definitely Not Mr. Darcy

“Entertainment in its purest form, a skirt-flying tumble of a story, and an excellent, lighthearted way to while away a quiet afternoon.”—New York Journal of Books

“A lively and engaging tale of a modern woman faced with the amusingly inelegant reality of Regency life.”—Abigail Reynolds, author of Mr. Darcy’s Noble Connections

“Composed of equal measures of romance, captivating characters, and clever writing, Definitely Not Mr. Darcy is a fun read.”—Chicago Tribune

“[A] fun, funny, and perfectly satisfying dip into the world so many of us would like to time travel back to—but with a thoroughly modern twist.”—Arielle Eckstut, coauthor of Pride and Promiscuity

“Chloe deals with Regency underwear, spiteful costars, and chamber pots with determination and sass . . . It’s delightful to read an Austen-inspired novel that is funny!”—Margaret C. Sullivan, author of The Jane Austen Handbook