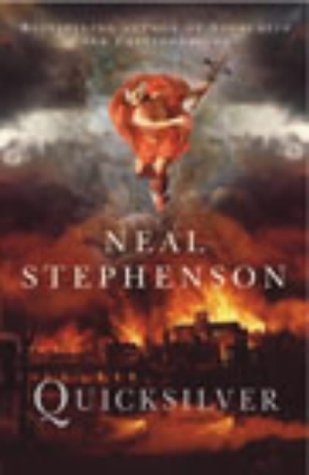 In which Daniel Waterhouse, fearless thinker and courageous Puritan, pursues knowledge in the company of the greatest minds of Baroque-era Europe -- in a chaotic world where reason wars with the bloody ambitions of the mighty, and where catastrophe, natural or otherwise, can alter the political landscape overnight.

In Quicksilver, the first volume of the "Baroque Cycle," Neal Stephenson launches his most ambitious work to date. The novel, divided into three books, opens in 1713 with the ageless Enoch Root seeking Daniel Waterhouse on the campus of what passes for MIT in eighteenth-century Massachusetts. Daniel, Enoch's message conveys, is key to resolving an explosive scientific battle of preeminence between Isaac Newton and Gottfried Wilhelm Leibniz over the development of calculus. As Daniel returns to London aboard the Minerva, readers are catapulted back half a century to recall his years at Cambridge with young Isaac. Daniel is a perfect historical witness. Privy to Robert Hooke's early drawings of microscope images and with associates among the English nobility, religious radicals, and the Royal Society, he also befriends Samuel Pepys, risks a cup of coffee, and enjoys a lecture on Belgian waffles and cleavage-—all before the year 1700.

In the second book, Stephenson introduces Jack Shaftoe and Eliza. "Half-Cocked" Jack (also know as the "King of the Vagabonds") recovers the English Eliza from a Turkish harem. Fleeing the siege of Vienna, the two journey across Europe driven by Eliza's lust for fame, fortune, and nobility. Gradually, their circle intertwines with that of Daniel in the third book of the novel.

The book courses with Stephenson's scholarship but is rarely bogged down in its historical detail. Stephenson is especially impressive in his ability to represent dialogue over the evolving worldview of seventeenth-century scientists and enliven the most abstruse explanation of theory. Though replete with science, the novel is as much about the complex struggles for political ascendancy and the workings of financial markets. Further, the novel's literary ambitions match its physical size. Stephenson narrates through epistolary chapters, fragments of plays and poems, journal entries, maps, drawings, genealogic tables, and copious contemporary epigrams. But, caught in this richness, the prose is occasionally neglected and wants editing. Further, anticipating a cycle, the book does not provide a satisfying conclusion to its 900 pages. These are minor quibbles, though. Stephenson has matched ambition to execution, and his faithful, durable readers will be both entertained and richly rewarded with a practicum in Baroque science, cypher, culture, and politics. --Patrick O'Kelley

Neal Stephenson is the author of Reamde, Anathem, and the three-volume historical epic the Baroque Cycle (Quicksilver, The Confusion, and The System of the World), as well as Cryptonomicon, The Diamond Age, Snow Crash, and Zodiac. He lives in Seattle, Washington.

Book Description Heinemann Educational Books. Condition: Good. A+ Customer service! Satisfaction Guaranteed! Book is in Used-Good condition. Pages and cover are clean and intact. Used items may not include supplementary materials such as CDs or access codes. May show signs of minor shelf wear and contain limited notes and highlighting. Seller Inventory # 0434008931-2-4

Book Description Paperback. Condition: Very Good. The book has been read, but is in excellent condition. Pages are intact and not marred by notes or highlighting. The spine remains undamaged. Seller Inventory # GOR002433113

6. Quicksilver: Volume One Of The Baroque Cycle