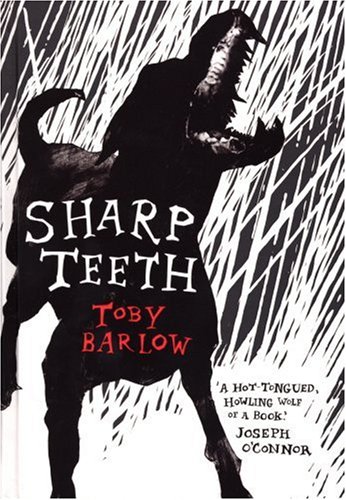 Toby Barlow is executive creative director at the advertising agency JWT in Detroit and a contributor to the literary magazine n+1 and the Huffington Post. He splits his time between Detroit, Michigan, and New York City. Sharp Teeth is his first book.

Vampires have been the ascendant pop monster ever since Anne Rice's 1976 bestseller Interview with the Vampire. Werewolves have always been the underdog, despite high-profile lycanthropes in the Harry Potter books and Stephenie Meyer's popular Twilight series for young adults.

Toby Barlow's briskly entertaining first book, Sharp Teeth, aims to put lycanthropes first in the supernatural sweepstakes, with a narrative as relentless and powerful as a pitbull's jaws. Much will be made of the book's form -- it's told in free verse -- but that seems like a gimmick here. Give or take a few punctuation marks, Sharp Teeth could just as easily have been written in prose, though that would have resulted in a far slimmer volume. There's an amusing shout-out to "Beowulf" in its opening lines ("Let's sing about the man there/ at the breakfast table"), but otherwise Sharp Teeth roams predictably, if enjoyably, within the well-trodden dog park of Los Angeles noir.

Anthony, a down-on-his-luck dogcatcher, is a figure familiar to any reader of hardboiled fiction, the loner who parks himself at the kind of bar where you know it's just a matter of time before The Girl walks in:

It's the same bar, the first one, the dark one,

Anthony is sitting there sore as hell

he wrestled a Saint Bernard today . . .

"Is this seat taken?" she asks.

There she is. Dark hair. Cautious blue eyes.

She looks at him a little too intently,

a subdued version of the look you'd expect to get

when you finally met

The girl is never named. She's an alpha dog, the sole female member of a pack of lycanthropes (Barlow shies away from the down-market term "werewolf') who favor limos and Tag Heuer watches in their human form, and whose canine predilections can be summed up as "Blood, fat, marrow, grease, sinew, muscle, guts, hide, fur, sleep."

In Barlow's world, shape-shifting isn't governed by the moon's cycles. It's a matter of will and discipline and an exchange of blood, loosely inspired by Native American lore but more influenced by the terse macho prose of Chuck Palahniuk -- think Dogfight Club.

Sharp Teeth's plot is tightly constructed, if nothing new: rival dog packs fighting over control of drugs, money, power. The cast of characters is similarly drawn from noir stereotypes -- good cop, bad dog, really bad dog. Still, any great noir lives or dies by its stylishness, and Sharp Teeth has got that in spades. Barlow's writing begs to be read aloud by Kathleen Turner, and he has a nice way of nailing his point in a few choice words -- "Anytime you got toy poodles breeding with coyotes/ it's gonna get interesting."

Best of all, his evocation of the various packs' dynamics rings true. There's the white collar pack, drawn from upscale law firms; the streetwise thugs who lay waste to Mom and Pop meth labs; and, most memorably, a group of surfers who cross the border into Mexico, where they fall prey to humans running a dogfight ring. Their canine revenge upon those tormenters should trouble Michael Vick's sleep for years to come.

Supernatural tropes tend to mirror cultural fears and fashions. Anne Rice's elegant undead made the transition from 1970s decadence to 1980s AIDS anxiety; the recent crop of cinematic and literary zombies staggers across a blighted landscape that seems to be the unavoidable legacy of global warming. Sharp Teeth draws blood in its nimble dissection of the current vogue for dogs, whose profile has expanded from Man's Best Friend to include Girl's Favorite Accessory. Barlow reminds us that even the goofiest golden retriever can become a wild thing under the wrong circumstances. And let's not even get started on pit bulls.

Barlow, an ad executive and contributor to the Huffington Post, has said that he wrote Sharp Teeth to appeal to the ADD generation, readers who don't want to be bothered with excess adjectives or punctuation. His success at this is a mixed blessing. The novel often feels more like a film treatment, especially as it pants breathlessly toward a conclusion in which hordes of dogs, good and bad, fight tooth and claw against men armed with night-vision goggles and assault rifles.

Still, along the way there are some lovely insights into what binds us to the canine tribe we've lived alongside for thousands of years. "Everyone/ has a dog story to tell," Barlow writes:

in all these tales the dog is the innocent shooting star

we all wish upon

until it burns up, aging fast and disappearing

behind our jagged horizons.

Each dog marks a section of our lives, and

in the end, we feed them to the dark,

burying them there while we carry on.

Shipping: US$ 5.11
From United Kingdom to U.S.A.
Destination, rates & speeds

Shipping: US$ 24.84
From United Kingdom to U.S.A.
Destination, rates & speeds