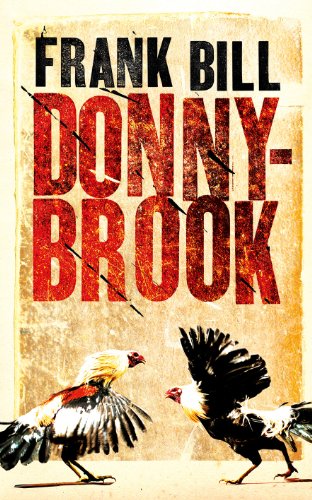 The raw and as-insane-as-anticipated first novel from Frank Bill, author of Crimes in Southern Indiana

The Donnybrook is a three-day bare-knuckle tournament held on a thousand-acre plot out in the sticks of southern Indiana. Twenty fighters. One wire-fence ring. Fight until only one man is left standing while a rowdy festival of onlookers—drunk and high on whatever’s on offer—bet on the fighters.
Jarhead is a desperate man who’d do just about anything to feed his children. He’s also the toughest fighter in southeastern Kentucky, and he’s convinced that his ticket to a better life is one last fight with a cash prize so big it’ll solve all his problems.
Meanwhile, there’s Chainsaw Angus—an undefeated master fighter who isn’t too keen on getting his face punched anymore, so he and his sister, Liz, have started cooking meth. And they get in deep. So deep that Liz wants it all for herself, and she might just be ready to kill her brother for it. One more showdown to take place at the Donnybrook.
As we travel through the backwoods to get to the Donnybrook, we meet a cast of nasty, ruined characters driven to all sorts of evil, all in the name of getting their fix—drugs, violence, sex, money, honor. Donnybrook is exactly the fearless, explosive, amphetamine-fueled journey you’d expect from Frank Bill’s first novel . . . and then some.

Frank Bill is the author of the story collection Crimes in Southern Indiana, one of GQ’s favorite books of 2011 and a Daily Beast best debut of 2011. He lives and writes in southern Indiana. Donnybrook is his first novel.

Book Description William Heinemann, 2013. Hardcover. Condition: Used; Good. Ex Library Copy **SHIPPED FROM UK** We believe you will be completely satisfied with our quick and reliable service. All orders are dispatched as swiftly as possible! Buy with confidence!. Seller Inventory # 3654876

Shipping: US$ 11.02
From United Kingdom to U.S.A.
Destination, rates & speeds