Items related to A Monster Calls 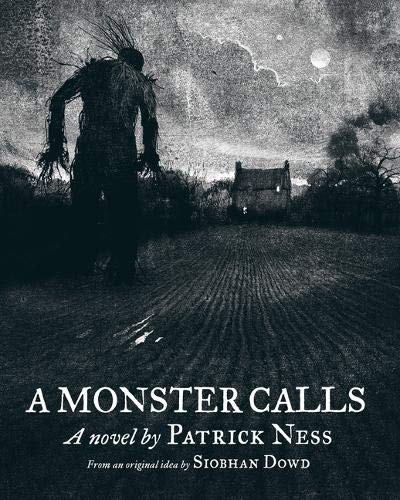 An unflinching, darkly funny, and deeply moving story of a boy, his seriously ill mother, and an unexpected monstrous visitor.

At seven minutes past midnight, thirteen-year-old Conor wakes to find a monster outside his bedroom window. But it isn't the monster Conor's been expecting-- he's been expecting the one from his nightmare, the nightmare he's had nearly every night since his mother started her treatments. The monster in his backyard is different. It's ancient. And wild. And it wants something from Conor. Something terrible and dangerous. It wants the truth. From the final idea of award-winning author Siobhan Dowd-- whose premature death from cancer prevented her from writing it herself-- Patrick Ness has spun a haunting and darkly funny novel of mischief, loss, and monsters both real and imagined.

Patrick Ness is the author of the critically acclaimed and best-selling Chaos Walking trilogy. He has won numerous awards, including the Guardian Children's Fiction Prize, the Booktrust Teenage Prize, and the Costa Children's Book Award. Born in Virginia, he lives in London.

Siobhan Dowd spent twenty years as a human rights campaigner for PEN and Amnesty International before her first novel, A SWIFT PURE CRY, was published in 2006. She won the Carnegie Medal posthumously in 2009 after her death at the age of forty-seven.

Jim Kay studied illustration and worked in the archives of the Tate Gallery and the Kew Royal Botanic Gardens, two experiences that heavily influence his work. His images for A MONSTER CALLS use everything from beetles to breadboards to create interesting marks and textures. Jim Kay lives in Edinburgh, Scotland.

There's no denying it: this is one profoundly sad story. But it's also wise, darkly funny and brave, told in spare sentences, punctuated with fantastic images and stirring silences. Past his sorrow, fright and rage, Conor ultimately lands in a place - an imperfect one, of course - where healing can begin. A MONSTER CALLS is a gift from a generous story­teller and a potent piece of art.
—The New York Times

A nuanced tale that draws on elements of classic horror stories to delve into the terrifying terrain of loss. . . . Ness brilliantly captures Conor's horrifying emotional ride as his mother's inevitable death approaches. In an ideal pairing of text and illustration, the novel is liberally laced with Kay's evocatively textured pen-and-ink artwork, which surrounds the text, softly caressing it in quiet moments and in others rushing toward the viewer with a nightmarish intensity.A poignant tribute to the life and talent of Siobhan Dowd and an astonishing exploration of fear.
—Kirkus Reviews (starred review)

Ness twists out a resolution that is revelatory in its obviousness, beautiful in its execution, and fearless in its honesty. Kays artwork keeps the pace, gnawing at the edges of the pages with thundercloud shadows and keeping the monster just barely, terribly seeable.
—Booklist (starred review)

A masterpiece about life and loss that will stay with the reader long after the final page is turned.
—Library Media Connection (starred review)

Book Description Condition: Good. A+ Customer service! Satisfaction Guaranteed! Book is in Used-Good condition. Pages and cover are clean and intact. Used items may not include supplementary materials such as CDs or access codes. May show signs of minor shelf wear and contain limited notes and highlighting. Seller Inventory # 0435161520-2-4

Book Description Paperback. Condition: Very Good. The book has been read, but is in excellent condition. Pages are intact and not marred by notes or highlighting. The spine remains undamaged. Seller Inventory # GOR009286113

Book Description Hardcover. Condition: Very Good. Very Good: a copy that has been read, but is in excellent condition. Pages are intact and not marred by notes or highlighting. The spine remains undamaged. Most items will be dispatched the same or the next working day. Seller Inventory # wbb0018920521

Book Description Condition: Very Good. This book is in very good condition and will be shipped within 24 hours of ordering. The cover may have some limited signs of wear but the pages are clean, intact and the spine remains undamaged. This book has clearly been well maintained and looked after thus far. Money back guarantee if you are not satisfied. See all our books here, order more than 1 book and get discounted shipping. . Seller Inventory # 7719-9780435161521

Shipping: US$ 9.49
From United Kingdom to U.S.A.
Destination, rates & speeds

Book Description Hardcover. Condition: Very Good. Shipped within 24 hours from our UK warehouse. Clean, undamaged book with no damage to pages and minimal wear to the cover. Spine still tight, in very good condition. Remember if you are not happy, you are covered by our 100% money back guarantee. Seller Inventory # 6545-9780435161521

Shipping: US$ 9.49
From United Kingdom to U.S.A.
Destination, rates & speeds