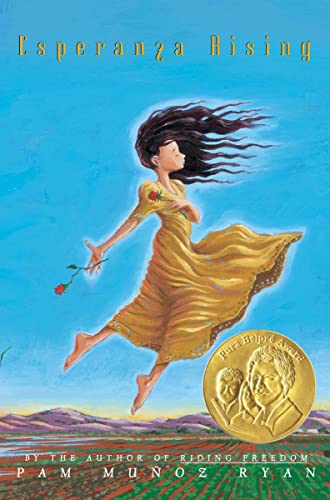 Esperanza thought she'd always live with her family on their ranch in Mexico--she'd always have fancy dresses, a beautiful home, and servants. But a sudden tragedy forces Esperanza and Mama to flee to California during the Great Depression, and to settle in a camp for Mexican farm workers. Esperanza isn't ready for the hard labor, financial struggles, or lack of acceptance she now faces. When their new life is threatened, Esperanza must find a way to rise above her difficult circumstances--Mama's life, and her own, depend on it.

Read by Trini Alvarado
Approx. 4.5 hours
3 cassettes
When Esperanza and Mama are forced to flee to the bountiful region of Aguascalientes, Mexico, to a Mexican farm labor camp in California, they must adjust to a life without fancy dresses adn servants they were accustomed to on Rancho de las Rosas. Now they must confront the challenges of hard work, acceptance by their own people, and economic difficulties brought on by the Great Depression. When Mama falls ill and a strike for better working conditions threatens to uproot their new life, Esperanza must relinquish her hold on the past learn to embrace a future ripe with the riches of family and community.

Pam Muńoz Ryan is the recipient of the Newbery Honor Medal and the Kirkus Prize for her New York Times bestselling novel, Echo, as well as the NEA’s Human and Civil Rights Award and the Virginia Hamilton Literary Award for multicultural literature for her body of work. She has written more than thirty books for young readers. Her celebrated novels, Echo, Esperanza Rising, The Dreamer, Riding Freedom, Becoming Naomi Léon, and Paint the Wind, have received countless accolades, among them two Pura Belpré Awards, a NAPPA Gold Award, a Jane Addams Children’s Book Award, and two Americas Awards. Her acclaimed picture books include Amelia and Eleanor Go for a Ride and When Marian Sang, both illustrated by Brian Selznick, and Tony Baloney, illustrated by Edwin Fotheringham, as well as a beginning reader series featuring Tony Baloney. Ryan lives near San Diego, CA with her family.