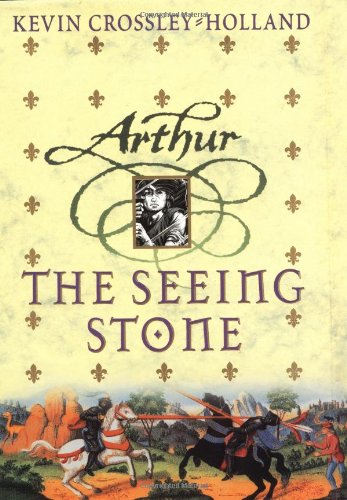 In late twelfth-century England, a thirteen-year-old boy named Arthur recounts how Merlin gave him a magical seeing stone which showed him images of the legendary King Arthur, the events of whose life seem to have many parallels to his own.

"Tumber Hill! It's my clamber-and-tumble-and-beech-and-bramble hill! Sometimes, when I'm standing on the top, I fill my lungs with air and I shout. I shout."

As The Seeing Stone opens, exuberant young Arthur has no idea what adventure lies ahead. A 13-year-old growing up in 12th-century England, Arthur soon discovers that his life parallels that of another Arthur, son of Uther centuries past, the legendary boy king "who was and will be." The second son of Sir John de Caldicot, lord of a manor near the Welsh border, Arthur narrates his everyday life in the Marchland in 100 clipped chapters of crisp, melodic prose. But his destiny entwined with that other, ancient Arthur is revealed only in snatches, after he receives (courtesy of our old friend Merlin) a piece of obsidian, a seeing stone, through which a well-woven story within a story unfolds.

But rather than the fantasy of T.H. White's The Sword in the Stone, Kevin Crossley-Holland offers a convincing and meticulously researched account of what life might have actually been like for a curious, capable, earnest young man in this peculiar time and place, with all its customs, rituals, and regimented routine and social structure. In a well-paced story that alternates between drama, comedy, and even a little mystery, Arthur tackles some surprisingly sophisticated topics, whether he's questioning the pompous priest Oliver (is the poverty on the manor truly part of God's will?), pestering his father over his plans for him (will he become a squire, as he wishes, or a monk or priest or school man?), or just contemplating his place in the scheme of things under the blue sky atop Tumber Hill. The Seeing Stone is a fun, involving read for kids, but will hold grownup attentions, too, with its flowing language, dense period detail, and all the questions that it asks--and doesn't always answer. (Ages 9 to 12) --Paul Hughes

It is 1199 and young Arthur de Caldicot is waiting impatiently to grow up and become a knight. One day his father's friend Merlin gives him a shining piece of obsidian and his life becomes entwined with that of his namesake, the Arthur whose story he sees unfold in the stone.

In this many-layered novel, King Arthur is seen as a mysterious presence influencing not just one time and place but many. The 100 short chapter are like snapshots, not only of the mythic tales of King Arthur, but the earthy, uncomfortable reality of Middle Ages.