Items related to The Two Sillies 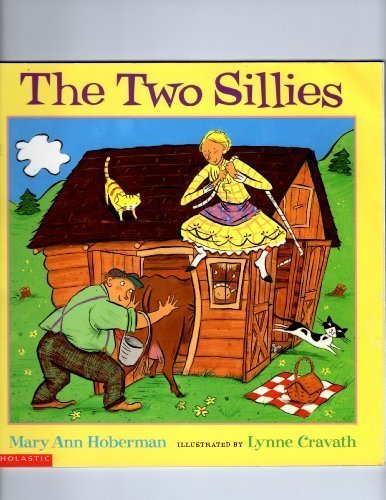 Getting a pet cat should be simple, but it isn't for Silly Lilly. At the advice of her friend Sammy, she finds herself cutting down trees, building a shed--even buying a cow in her quest for a cat. Is all this work really necessary?
Told in whimsical rhyme, Mary Ann Hoberman's delightful story follows two perfectly matched and utterly silly friends on a circuitous laugh-aloud path to a happy ending.

Mary Ann Hoberman has published more than twenty books for children, including the American Book Award winner A House Is a House for Me. She lives in Greenwich, Connecticut.

Lynne Cravath has illustrated numerous books for children The Two Sillies is her first book for Harcourt. She lives in Phoenix, Arizona.

In measured, never forced verse, Hoberman's (A House Is a House for Me) flightyDor is it grounded?Dromp introduces Lilly, who wants a cat like her friend Sammy's. When he advises her to chop down some nearby trees, Lilly thinks this sounds a little silly: "Lilly said, 'Now why is that?/ Cut down trees to get a cat?'/ Sammy said, 'That is the way./ You must cut those trees today.'" She complies with this directive, as with subsequent ones to build a shed and buy a cow, whose milk then attracts a cat. When mice appear to scare Sammy, it is his turn to follow Lilly's directions, which eventually results in the disappearance of the miceDand two satisfied felines with full tummies. Cravath (Spunky Monkeys on Parade) uses a limber black line to create bright and buoyant, almost cartoonish pictures, but she invests the characters with poise; they look quizzical but never unintelligent. Youngsters can muse on which is sillier: the seemingly nonsensical acts that finally achieve the characters' desired goals or the fact that, once this is accomplished, each character smugly tells the other, "See, I didn't have to do/ All that work you told me to." Readers will likely cotton to these silly or are they sage? pals. Ages 3-7. (Oct.)
Copyright 2000 Reed Business Information, Inc.