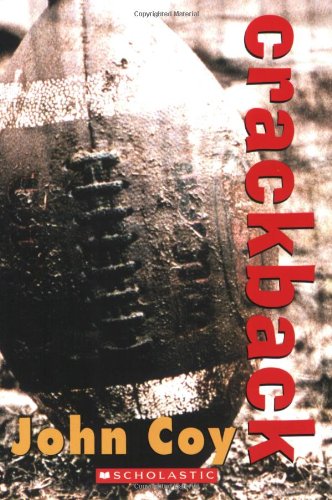 When Miles Manning, a successful high school football player, discovers his teammates are using steroids--and one of them is his best friend--he's faced with a tough decision: Is he willing to do what it takes to win? Football is his life, and his family, especially his dad, is pinning its hopes on him. It's a lot of pressure for a high school junior to bear. This gripping look into the world of high school boys and athletes--and their struggle to be the best--is provocative and searingly honest.

John Coy is an award-winning author, who worked as a dishwasher, mattress maker, and tour guide before taking up writing. He's active in sports and is a member of the NBA Reading All-Star Team as part of the Read to Achieve program. John has traveled to all fifty states as well as to many countries internationally.

His work includes Strong to the Hoop, an American Library Association Notable Book, Night Driving, a Marion Vannett Ridgway Memorial Award winner and a Horn Book Fanfare title, Two Old Potatoes and Me, a Charlotte Zolotow Honor Book, a Nickelodeon Jr.¹s Best Books of the Year, and a featured book on PBS Reading Rainbow, and Vroomaloom Zoom, a book of excellence on the Children¹s Literature Choice List. His newest picture book Around the World is about international basketball.

John¹s latest title is Crackback, a young adult novel that reveals the high stakes world of high school football as a young player finds himself in a difficult situation. John's experience as a defensive back on his high school football team brings an authentic voice to which readers will be able to relate. As a boy I loved playing football in the back yard and later in organized games,” says John. Football was the one place where smashing into people was not only okay, it was rewarded.”

The idea for the novel came when he wrote Strong to the Hoop. My editor for Strong to the Hoop said that the language and action convinced her that I had a novel in me and that she would like to see it when I wrote it,” John states. When I was ready to write it, the topic that grabbed me was high school football.”

John also wanted to convey his belief that it is impossible to overestimate the degree of identification some teenagers have with sports. I was such a teenager, and my choices for reading such books were much more limited than the options available today.”

John Coy writes and plays sports in Minnesota and wherever else he can join a game.

Booklist 9/1/05
*STAR* Coy, John. Crackback. Nov. 2005. 208p. Scholastic, $16.99 (0-439-69733-6).
Gr. 8-11. Sophomore football star Miles is excited about his strong team's chances in the new season. Then his favorite coach resigns, and Miles chafes under the new coach, who favors phrases such as, “This isn't a democracy. This is a dictatorship, and I'm the Dick.” Miles feels alienated from his teammates at school, who have turned to steroids, and also at home, with his angry father. In his first novel, the author of numerous picture books, including Strong to the Hoop (1998), writes a moving, nuanced portrait of a teen struggling with adults who demand, but don't always deserve, respect. A subplot involving a school assignment about family roots and the Middle Passage feels somewhat patched on, but Coy connects the story's diverse elements–family secrets, his father's rages and homophobia, a burgeoning romance, football, and shifting friendships–in a loose jumble that, like Miles' strong first-person voice, is sharply authentic, open ended, and filled with small details that signify larger truths. For another powerful look as the emotional lives of male teens athletes, suggest A.M. Jenkins' Damage (2001). – Gillian Engberg

Kirkus 11/1/05
Miles is excited about his junior-year football season. He knows the sport, loves playing defense and even though his father can be overbearing, he's taught Miles basic skills and how to play smart and to respect the coach. Zach, who has been Miles's best friend and teammate, is transforming himself, now. He's not just bulking up, but passing out uppers and advocating shooting up steroids as something all players do. When the regular coach steps aside, belligerent inexperienced Coach Stahl takes over and Miles has to consider carefully how important is the sport to him and how much he wants to risk. Coy obviously knows the gridiron and uses crackback, a football term meaning a block coming from the outside and behind, to symbolize all the ways sudden changes or surprises in life can throw you for a loop. Coy makes fun of the stupid clichés that surround the sport while maintaining a strong love of the game, managing to integrate girlfriends, serious social history and family dynamics seamlessly. Most of the recent quality sports fiction has focused on basketball or wrestling, which makes this extra welcome. (Fiction. YA)

SLJ 12/1/05
COY, John. Crackback. 206p. CIP. Scholastic. 2005. Tr $16.99. ISBN 0-439-69733-6. LC 2004030972.
Gr 7 Up–Coy takes the topic of football and weaves it in and out of other conflicts typical of teenage boys such as father/son relationships, girls, steroids, and realizing that there is more to life than just the game. Miles is a likable and talented player who tries to please everyone: coaches, his father, his teachers, and the girl he is interested in. Regardless of his efforts or his talents, he can't seem to satisfy his coach and winds up on the bench where he meets, and likes, the second-string players who have lives outside of football–something that has never occurred to Miles or his father. In addition, he refuses to take steroids, even though his teammates do. Through his struggles with his coach and his dad, he begins to learn that life is complicated and that answers don't always come in the form of X's and O's. The family secret that drives his father, the interesting girl who shows him that the world is a big place, and the intense, sometimes unbelievable coach who teaches him that you can't please some people, no matter what, give Miles a new, perhaps healthier, perspective. Boys will appreciate the well rounded characters and the plot that mixes sports with real life. It doesn't hurt that there is some great football action throughout.–Julie Webb, Shelby County High School, Shelbyville, KY