Items related to Into the Volcano

Wood, Don Into the Volcano 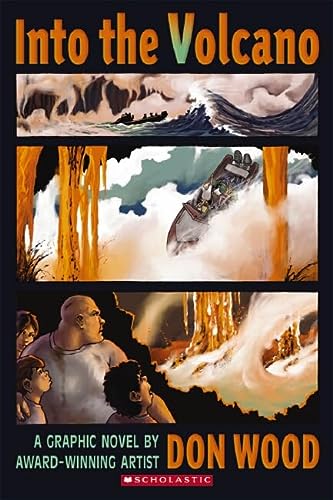 Don Wood, bestselling Caldecott artist, rocks the graphic-novel world with his new paperback!
The volcano is erupting, and brothers Sumo and Duffy are trapped inside a deep lava tube--almost certain death. How did they get here? A vacation "hike" turned out to be a cut-throat search for their missing family fortune.
In a wildly dangerous twist of events, the boys try to escape--but rivers of lava are blocking their exit! The remote island of Kocalaha is threatening to explode at any minute. Will the boys survive?
Don Wood's rip-roaring adventure keeps readers hooked and turning the pages in this cinematic graphic novel that garnered outstanding critical acclaim. As one reviewer wrote about this book, "the American Library Association will either have to start handing Caldecott Medals over to comic books or create an entirely new award for them."
Into the Volcano is a rollercoaster read for all ages by an internationally acclaimed artist who has created scores of bestselling picture books published in more than twenty languages around the globe.

Don Wood is the internationally beloved illustrator of numerous classics such as IT'S DUFFY TIME!; THE NAPPING HOUSE; KING BIDGOOD'S IN THE BATHTUB; and JUBAL'S WISH. He recently wrote and illustrated his brilliant graphic novel, INTO THE VOLCANO (now in paperback, 2012). He and his wife, Audrey, live in an off-grid, untamed area of Hawaii with their three dogs, two goats, and a flock of chickens.

"Wood's vividly colored artwork brings the perils the siblings face into startling focus. Keenly observed depictions of the Hawaiian landscape and geological processes lend an impressive veracity to this exciting and unusual offering. It is a rare example of a graphic novel for young people that is neither manga nor mainstream."--SCHOOL LIBRARY JOURNAL, starred review
"The action moves along at break-neck speed"--BOOKLIST, starred review
"a non-stop thrill ride through one of Earth’s most exotic and terrifying natural wonders."--CHILDREN'S LITERATURE
"will appeal to those boys who wouldn’t be caught dead reading a book, because from cover-to-cover they will find nothing but fast-paced action and excitement."--LIBRARY MEDIA CONNECTION
"Wood’s graphic-novel debut is visually exciting, with eerily delineated characters of questionable loyalty, a pair of Everykid brothers who are wondrously expressive on this emotional rollercoaster ride, and an active volcano whose pyrotechnics are real scene-stealers."--THE BULLETIN OF THE CENTER FOR CHILDREN'S BOOKS

1. Into the Volcano (Paperback)

Book Description 2013. Paperback. Condition: New. Paperback. Don Wood, bestselling Caldecott artist, rocks the graphic-novel world with his new paperbackThe volcano is erupting, and brothers Sumo and Duffy are trapped inside a deep lava tube?a.Shipping may be from multiple locations in the US or from the UK, depending on stock availability. 174 pages. 0.390. Seller Inventory # 9780439726740

3. Into the Volcano (Paperback)

Book Description 2013. Paperback. Condition: New. Paperback. Don Wood, bestselling Caldecott artist, rocks the graphic-novel world with his new paperbackThe volcano is erupting, and brothers Sumo and Duffy are trapped inside a deep lava.Shipping may be from our Sydney, NSW warehouse or from our UK or US warehouse, depending on stock availability. 174 pages. 0.390. Seller Inventory # 9780439726740

4. Into the Volcano Wood, Don