Items related to The Deer Leap 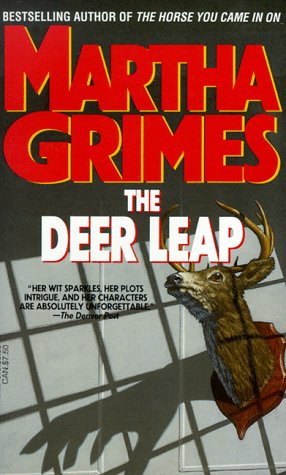 When a series of "accidents" befalls both animals and humans in the village of Ashdown Dean, Superintendent Richard Jury, his aristocratic assistant, Melrose Plant, the local police, and a fifteen-year-old animal lover join the search for a killer

This is the seventh crime novel by Grimes, an American who writes wih assurance on the exploits of Scotland Yard's Richard Jury and his titled friend Malcolm Plant. They meet at The Deer Leap, a pub in Ashdown Dean where people and pets have been dying "accidentally." Plant focuses his attentions on a solitary, 15-year-old girl who calls herself Carrie Fleet. She's an amnesiac, rescued from London lowlifes who had found the child and were using her to collect government money for her support. Carrie's unlikely savior is a baroness, living on drunken fantasies in the decayed splendor of her late husband's estate. In an isolated corner of the grounds, Carrie maintains a sanctuary for abused animals. Her zealous care makes her a suspect in the destruction of the local fox-hunting headquarters, but Jury casts his net elsewhere. In the last act of the witty and deeply moving drama, retribution for heinous crime is exacted. Here gentle Plant plays a role so utterly unexpected that readers will feel its impact for a long time. November 26
Copyright 1985 Reed Business Information, Inc.

"Charm and energy...A brilliantly interwoven multiple narrative."—Time
"[A] witty and deeply moving drama...Readers will feel its impact for a long time."—Publishers Weekly
"Read one of [her novels] and you'll want to read them all."—Chicago Tribune
"One of the most fascinating mystery writers today."—Houston Chronicle