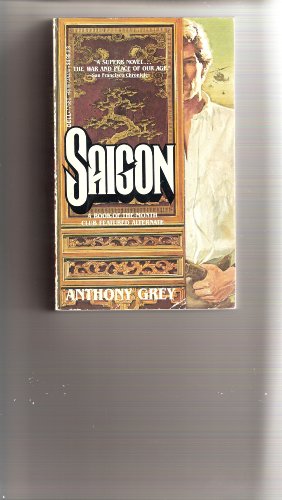 Four families--American, French, and Vietnamese--find their destinies intertwined as they endure fifty years of political turmoil, revolution, and war, in a story that traces the fate of Saigon from 1925 to 1975

Anthony Grey became a foreign correspondent with Reuters after beginning his career in journalism in Norfolk, England, where he was born and educated. He reported on the Cold War from East Berlin, Prague, Warsaw, Budapest, Sofia, and Bucharest for two years before being assigned to China to cover the Cultural Revolution. There, his imprisonment by Red Guards in a house beside the historic Forbidden City of China’s emperors attracted worldwide headlines for over two years. After his release, he was awarded the Order of the British Empire (OBE) for services to journalism, and was named UK Journalist of the Year. He has gone on to become a radio and television broadcaster, bestselling historical novelist, independent publisher, and frequent public speaker.

“Like James Michener and James Clavell, Mr. Grey is a master storyteller. Unlike them, however, he has something pertinent to say and does so in distinguished fashion . . . Saigon is a novel of terrible importance.” —The Kansas City Star
“A long overdue epic masterpiece of twentieth century Vietnam . . . The author balances the political intrigues and wartime horrors with a story of human sensitivity and love.” —Library Journal
“This book makes a claim as the Vietnam equivalent to Norman Mailer’s The Naked and the Dead written about the Second World War.” —Daily Mail
“This superb novel could well be the War and Peace of our age. By using a technique of historical progression, author Anthony Grey does for the Vietnam wars what Leo Tolstoy did for the Napoleonic wars.” —San Francisco Chronicle “One of the most memorable love stories of our time has been delivered with a firm literate hand by Anthony Grey who with this novel establishes himself as one of the finest storytellers plying his trade today. . . . It’s a book which no doubt will stand the test of time.” —West Coast Review of Books
“A political statement, a great adventure story, and an accurate window on that war- ravaged country, Vietnam . . . Anthony Grey has produced a masterpiece.” —Leatherneck Magazine of the Marines