Items related to My Heart's Desire 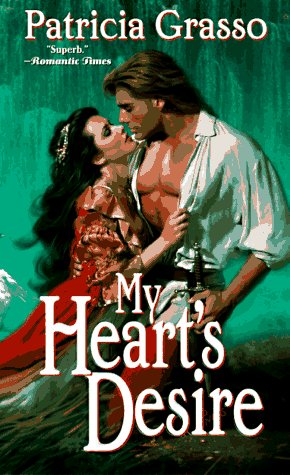 Blythe hungered for his caresses, knowing only time and sweet seduction would win the hardened heart of Roger Debrett, Earl of Eden, the man she'd married--to save him from hanging for the murder of his first wife.  She knew with her druid's instinct that they'd loved each other forever and that they were meant to be together, even when Roger vowed to annul their marriage once he found the real killer.  Roger's blazing eyes devoured her, even as he spoke words that hurt.  His touch burned even as he denied its power.  Now Blythe prepared to conquer her husband--body and soul...

Roger Debrett owed her his life.  He tried to see her as the sweet child he remembered from long ago, but reality struck--with ebony hair, violet eyes, and a body he was driven to possess.  He couldn't afford to love.  Yet even as a killer stalked his every move, he was consumed by Blythe, the innocent temptress who stood in harm's way...

"A magical blend of romance, humor and adventure...a heavenly read that will bring joy to your heart and a smile to your face."
--Affaire de Coeur

Desert Eden
"A very vividly written story which portrays the life and times of the Turks in detail and brings them to life."
--Rendezvous

Roger appeared exactly as Blythe had remembered him. Tall and well-built, her beloved moved with grace. He seemed slightly sinister in black, yet his shaggy light-brown hair and handsomely chiseled features were the same.

Five years, however, had altered his expression. Tight-lipped grimness had replaced smiling affability.

And then Roger shifted his piercing sky-blue gaze to her. For one brief moment his expression mirrored his surprise as he looked at her with the critical eye of a connoisseur of women. In an instant Roger shuttered his feelings.

Blythe understood his ploy. She'd seen her father do the same thing thousands of times with visiting courtiers and merchants. Only among family did her father allow his emotions and his thoughts to show.

Blythe watched Roger cross the chamber toward her. She felt the heated blush upon her cheeks when he halted only inches from her.

"You have grown up rather nicely," he said, bowing formally over her hand.

Blythe nodded, unable to find her voice through her shyness. Sacred Saint Swithin, the man would think she was a blinking idiot. How could she ever compete with the sophisticated court ladies to whom he was accustomed?

Gazing into his eyes, Blythe forgot her own fears. She recognized his heart-wrenching misery. It was as tangible as the stones beneath her feet.

Abruptly, Roger turned away. "I trust you carry the betrothal contract," he said, shaking hands with her father.

Richard nodded. "Shall we get down to business?"

"I desire private conversation with Blythe before I sign," Roger said.
"We can step outside," the chaplain offered.

"Do not bother. Blythe and I will go upstairs," Roger replied. He flicked a glance at the earl and added, "The door will remain open."

Blythe hesitated when Roger turned to her and offered his hand. She flicked a nervous glance at her father, who gave her an encouraging smile.

"Child, you will be perfectly safe," Roger said in a clipped voice.

Blythe snapped her gaze to his and tried to explain. "My lord, you misunderstand."

Blythe nodded once and crossed the chamber to the spiral staircase, feeling his presence close behind her. Troubling thoughts bade her climb the stairs slowly. This reunion wasn't exactly what she'd envisioned in her daydreams. Roger's displeasure was all too obvious.

Blythe walked into the bedchamber and scanned it quickly. Against one wall stood a four-poster bed, complete with draperies and fur coverlet. A summer darkened hearth had been built into another wall. Two windows allowed the afternoon sunlight into the room.

"Losing one's freedom is the height of pleasantness," Roger replied, close behind her, so close she could smell his bay scent.

"I'm sorry," she apologized, whirling around to stare at his chest. "You didn't mean--"

"Please sit down," he interrupted.

The only place to sit was the bed.

Blythe crossed the chamber as slowly as a woman going to the gallows and perched on the edge of the bed. Five years of separation had made Roger a stranger. He was still a desirable man, but she was no longer a child. They would become man and wife in a few short weeks. And then? Oh, Lord, they would share a bed like this one. Intimately...

That impure thought kept her gaze downcast and flushed her cheeks. The heated blush deepened to a dark rose when she spied his black boots planted on the floor in front of her.

Blythe lifted her gaze from her white-knuckled hands to meet his questioning look and give him an uncertain smile.

"You do not have to marry me," Roger said.

"Haven't you wondered if your husband-to-be is a murderer?" he asked.

"You are innocent of any wrongdoing," she answered emphatically.

Roger knelt on one bended knee in front of her, but refrained from touching her hand. "Are you certain you wish to do this?" he persisted. "Is the earl forcing you to the altar?"

"My father would never do that," Blythe answered. Without warning she reached out and brushed a fingertip across his left cheekbone, asking, "Did they beat you?"

Her question seemed to surprise him. "No. Why do you ask?"

"I see the faint traces of a scar," she answered.

"`Tis your mark upon me," he said, amusement lighting his eyes. "Do you recall a certain gift box used as a weapon?"

"I'm sorry about that," Blythe apologized in a choked voice.

"I forgave you long ago," Roger assured her. He stood then and added, "As a matter of fact, you were correct."

"You predicted I'd regret marrying Darnel," he answered, then turned away, discouraging further conversation. "Shall we go below?"

Downstairs, Earl Richard had the betrothal contract spread across the table. The ink and the quill sat beside it.

"Signing a contract without reading it first is bad business," Richard said as Roger reached for the quill.

Roger flicked an unamused glance at him and, without bothering to reply, affixed his name to the document. Blythe signed next, then Richard, followed by their two witnesses, the Tower chaplain and the constable.

"Do you have the ring?" Roger asked.

Richard nodded. He produced a small gift box from inside his doublet and passed it to the younger man.

Roger opened its lid and smiled. "My lady, you have always reminded me of this," he said, slipping the ring onto her finger.

Dropping her gaze from his handsome face to her left hand, Blythe knew their marriage would be blessed. Her betrothal ring was a delicate butterfly perched on top of a gold band. The butterfly's golden wings and body had been set with rubies, emeralds, sapphires, and diamonds.

His message was clear. She was still his butterfly, his psyche, his soul.

"`Tis exquisitely lovely," Blythe said, casting him a shy smile. "I shall cherish it always."

"Cherishing gold and jewels is what you ladies do best," Roger replied, unable to mask his bitterness. "`Tis nothing personal, child. I have vast experience with the ladies and no real wish for a second marriage."

His stinging remarks wiped the smile off Blythe's face, and her proud Devereaux nature surfaced to vanquish her maiden's shyness. How dare he humiliate her in such a manner. Even an unwanted bride deserved pleasant memories of her betrothal and wedding. Embarrassment mingled with anger to color her cheeks, but pride made her strike back.

"My lord, you do demonstrate your appreciation for my charity in the oddest manner," Blythe countered, cocking an ebony brow at him.

"Charity, my lady!" Roger asked, rounding on her.

She lifted her chin a notch and informed him, "I am not the one in need of a spouse."