Items related to The Strangler 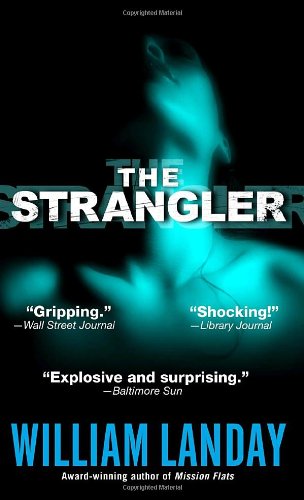 From the New York Times bestselling author of Defending Jacob

Boston, 1963. A city on edge. On street corners, newsboys hawk the shocking headline: KENNEDY IS DEAD. In the city’s underworld, a mob war rages. But what terrifies Bostonians most is the mysterious killer who has already claimed a dozen victims, a murderer whose name is indelibly linked to their city: the Boston Strangler. This is the electrifying backdrop of William Landay’s magnificent new novel, a story of one Irish-American family, a city under siege, and the long shadow cast by the most infamous killer of his day . . .

For the three Daley brothers, sons of a Boston cop, crime is the family business. They are simply on different sides of it. Joe is the eldest, a tough-talking cop whose gambling habits—fast women, slow horses—drag him down into the city’s gangland. Michael is the middle son; a Harvard-educated lawyer working for an ambitious attorney general, he finds himself assigned to the embattled Strangler task force. And Ricky, the devil-may-care youngest son, floats above the fray as an expert burglar—until the Strangler strikes too close to home.

As Joe’s mob debts close in around him . . . and Michael becomes snarled in a murder investigation gone very wrong . . . and Ricky is hunted by both sides of the law, the three brothers—and the women who love them—are forced to take sides. Now each must look deeper into a killer’s murderous rage, into their family’s own lethal secrets, and into the one death that has changed them forever. As William Landay’s complex, compassionate, and terrifying novel builds to a climax, two mysteries will collide—and a shattering truth will be revealed.

William Landay is the author of the highly acclaimed Mission Flats, which was awarded the John Creasey Memorial Dagger as the best debut crime novel of 2003. A graduate of Yale University and Boston College Law School, he was an assistant district attorney before turning to writing. He lives in Boston, where he is at work on his next novel of suspense.

In the subway: twenty swaying grief-stunned faces. A man insensible of his own leg pistoning up and down, tapping tat-tat-tat-tat-tat on the floor. At Boylston Street the track curved, the steel wheels shrieked against the rails, and the lights flickered off. Passengers let their eyes close, like a congregation beginning a silent prayer. When the lights came on again and their eyes opened, Ricky Daley was watching them.

At Park Street station, Ricky jogged up the stairs to the street, into a stagnant crowd. Offices had closed early, creating an early rush hour, but there was nowhere to go. The news was everywhere, still sensational though everyone had already heard it. Newsboys squawked “Extra!” and “Read it hee-yuh!” and “Exclusive!” They lingered on the hissing alien word “Ass-sass-inated!” Over on Tremont Street, crowds clumped against parked cars to listen to the news on WBZ; they bowed their heads toward the car radios. But there was no real news, no one knew anything, so eventually they turned away, they loitered on the sidewalk, and shambled in and out of the Common. It was midafternoon, three hours or so after–after President Kennedy first slapped at his neck as if he’d been stung by a bee–three hours after but the concussed mood was not dissipating. It was deepening, and more and more the stupor was infused with anxiety: What was next? From what direction would the attack come? How in the hell would they all get through this?

Ricky strolled right through them, working his way west. It was quieter in the Common, away from the street. No one seemed to be speaking. No one knew what to say. In the quiet he could make out the murmur of the city, distant engines and car horns and cops’ whistles. He wore a gray overcoat and an itchy hundred-and-twenty-five-dollar suit. His shoes, new black brogans, made squinching sounds when he walked. He had tried to soften them by wearing them around his apartment, but they still pinched across the top of his feet. He had succeeded, at least, in dulling the gloss of the leather by rubbing it with saliva. The shoes should look polished but not new. New shoes might draw attention.

By the Frog Pond, a woman on a slatted park bench held a handkerchief to her mouth, balled up in her fist. Her eyes were watery. Ricky stopped to offer her the stiff new handkerchief tri-folded in his jacket pocket.

Ricky gazed up, granting her the privacy to mop her nose.

“Who would do such a thing?” The woman sniffled.

Ricky looked down again, and he detected a shy grin at the corners of her mouth. Smile, he thought. Go on.

“Who would do this?”

Go ahead and smile. Because who could deny there was a little secret pleasure in it? Kennedy was dead, but they had never felt quite so alive. All these nine-to-five suckers, all the secretaries and waitresses and Edison men–it was as if they had all been drowsing for years only to snap awake, here, together, inside this Great Day. Ricky thought that, if he wanted to, he could explore this girl for information (where did she work? did she have a key? was there an opportunity there?). She was available. Probably she felt a little intoxicated by this feeling of nowness. Until today, she had never felt so thrillingly present in each moment. It was a limitation of human consciousness: We live only in the future and past, we cannot perceive now. Now occupies no space, a hypothetical gap between future and past. Only an exceptional few could feel now, athletes and jazzmen and, yes, thieves like Ricky Daley, and even for them the sensation was fleeting, limited to the instant of creative action. Cousy knew the feeling; Miles Davis, too. The boundless improvisational moment. Today this girl was experiencing it, and she wanted to share the experience even with a stranger. Well, Ricky figured, it made sense–Kennedy’s murder was exciting. It was a good day to work.

“I messed up your handkerchief. I’m sorry. Must be expensive.”

He left her there. He walked on through the Public Garden. His breath made little clouds in the cold.

At Arlington Street, the doors to the church were propped open. The interior was warm and eggshell white. Through the open doors, Ricky could see an organist, a young man with flushed cheeks and a lick of blond hair that flopped in his eyes until he flipped it back with a toss of his head like a horse. The young man played in a sort of rapture. His eyes were shut, his torso swayed expressively.

Ricky walked on, west through the Back Bay, in a series of zigs and zags. On the residential side streets, he turned each corner, stopped, and looked back for a good long while. He hadn’t noticed any tails, but you never knew. Even on a day like this, with everyone smashed by the news, cops included, it was important to maintain your technique.

At the Copley Plaza Hotel, a doorman in a long overcoat with gold braiding and epaulettes held the door. “Good afternoon, sir.”

“Afternoon.” Ricky took care to glance at the man only for an instant.

He moved quickly through the lobby, but not too quickly. Purposeful, proprietary, calibrating his movements to the room. He had a fingerman at the front desk, who gave Ricky a nod.

On the house phone he dialed room 404. No answer.

He sauntered into the Oak Room to wait at the bar for fifteen minutes, to be sure. A guest might go back up to his room for a forgotten item in the first few minutes after walking out, but he almost never returned once he’d been out for a quarter hour or more. Ricky made a point of checking his coat and tipping the girl a quarter. At the bar he ordered a highball and settled in. Rather than gawk at the luxurious room with its carved plaster ceiling and heavy furniture, he watched the door. He folded his arms across his chest, straining his suit jacket, because he’d noticed that rich people were comfortable in their expensive clothes. They wore a good suit as if it were an old sweater. They didn’t care.

After a half hour of this business, pleased with the way he’d blended into the herd (no one, not even the bartender, would remember him later), he called room 404 again on the house phone and again got no answer. He drained his highball and in a tipsy voice he told the bartender an old joke–about the giraffe who walks into a bar and announces, “The highballs are on me”–before leaving. The bartender’s face puckered: Didn’t this jackass know Kennedy was dead?

Elevator to the fourth floor.

At room 404 he gave a brushy knock, then took a key from his pocket and let himself in.

He checked the room. Empty.

Back to the door. Gloves on. A glance up and down the hallway. He took a paper clip from his pocket, broke an inch of wire from it, slid the wire into the keyhole to plug it, then closed the door.

Checked the dresser. Checked the closets. He worked quickly but without noise and without leaving a mess. Found what he was looking for duct-taped to the inside of the toilet tank (clever prick): a yellow silk jewelry bag.

Ricky emptied the bag onto the bed. Loose diamonds. Some small jewelry pieces. Packets of hundred-dollar bills, banded. He separated out some of the jewelry, the gold plate, the pieces too bulky to conceal. That left a glassy heap. There might have been a half million dollars mounded up there. A cool little cone of diamonds.

The corners of Ricky’s mouth tried to curl up into the tiniest unprofessional smirk, which he smothered.