Items related to Laugh Till You Cry

Laugh Till You Cry 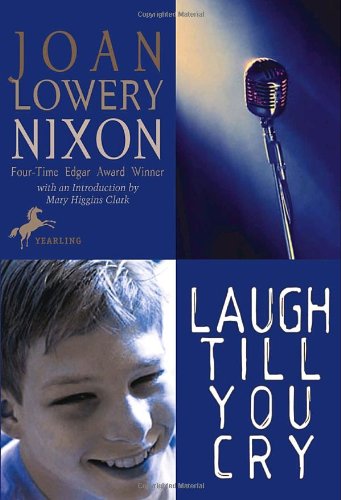 THIRTEEN-YEAR-OLD Cody doesn’t like Texas. He and his mom were only supposed to spend the summer there, helping out his grandmother. But Cody’s grandmother is sick and needs them to stay. Now he’s the new kid at the local middle school and all his friends are back in California. You’d think Cody’s cousin Hayden would show him the ropes. Not only is Hayden in the same grade, he lives next door. But Hayden doesn’t want anything to do with Cody.

Cody’s luck begins to change when he befriends Officer Ramsey, a policeman and aspiring stand-up comic. Officer Ramsey appreciates Cody’s jokes so much, he pays Cody for the material! But it’s no laughing matter when a crime is committed at school and Cody becomes a suspect. Cody is going to need more than jokes to solve this mystery—and clear his name.
From the Hardcover edition.

CHAPTER ONE
Dodging low tree branches, leaping over dips and cracks in the sidewalk, Cody Carter ran harder and faster down Chimney Rock than he had ever run in his entire life. Someone was chasing him and quickly closing the short gap that lay between them.

The person yelled something, but fear and his own loud gasping for breath blocked Cody's ears, and he couldn't make out what was said. The only words that bounced through his brain were his: I'm only thirteen years old. I'm too young to die.

Ahead of him lay San Felipe, with cars backed up, waiting for the stoplight to change. In the nearest lane was a blue and white cop car, and Cody aimed for it, knocking on the passenger-side window. As he stared into the wide, surprised eyes of the uniformed policeman behind the wheel, Cody managed to croak, "Help!"

The officer flipped on his hazard lights and jumped from the car. Cody was bent over the fender, wiping rivulets of sweat from his eyes and gulping air.

"What's the matter, kid?" the officer called as he walked around the front of his sedan. He placed a firm hand on Cody's arm. "Are you okay?"

Cody twisted to look over his shoulder. His cousin Hayden Norton had drifted back and was standing behind some of the solid, broad-limbed oak trees that lined the street. Hayden's buddy Bradley Lee was with him. They were both at least five inches taller than Cody, even though they were all the same age and in the same grade at school.

Hayden and Brad watched Cody warily, practically sniffing the air like a couple of dogs as they waited to see what would happen next. But Hayden's other sidekick, Eddie Todd, shorter and even sneakier, was quietly edging his way back along the street. It was just like Eddie to leave the others, Cody thought. If there was going to be trouble, Eddie wouldn't be in it, even though he probably started it.

"Those guys want to kill me," Cody told the officer. He straightened, able now to breathe more easily.

The officer smiled. "Take a poke at you, maybe, but are you really sure they want to kill you?"

The humor in his voice made Cody flinch. "They do," he insisted. "They said they were going to drag me back to school and stick my head in a toilet. Drowning somebody is killing them, isn't it?"

For the first time Cody craned his neck upward to take a good look at the policeman beside him. The man had to be at least six feet three, with broad shoulders. His dark eyes were crinkled at the outer corners, as if he were trying hard not to smile.

"What did you do to make them so mad at you?" The officer turned briefly, and Cody could see him sizing up Hayden and Brad. Eddie was long gone.

"I moved here," Cody answered. He pointed at Hayden, who was still peeking out from behind the trees. "That tall kid with the yellow hair and the big gut is my cousin Hayden. He just plain doesn't want me to be here."

"My grandmother's house. Hayden lives right next door. Mom and I came here to live with my grandmother because she's really sick."

"And where does she live?"

"On Longmont. I don't think it's too far from here."

The officer glanced back at Hayden and Brad. Then he opened the passenger-side door of his sedan. "Hop in," he said. "I'll give you a lift home."

Gratefully, Cody picked up his backpack and scrambled into the car, closing the door tightly behind him. He sneaked a quick look at Hayden, but the two boys had turned around and were strolling in the opposite direction.

As the officer started his patrol car, he said, "My name's Jake Ramsey. What's yours?"

"Cody Carter." Quickly he added, "Thanks for helping me out, Officer Ramsey."

"No problem. And call me Jake. It's easier to remember. Where are you from, Cody?"

"California. Santa Olivia." Cody heard the glumness in his voice and realized he was frowning.

Jake threw him a quick look. "I take it you'd rather be there right now than in Houston."

"Right," Cody answered. "My grandma's got something wrong with her heart. It beats out of rhythm, so my mom took a leave of absence from teaching kindergarten and came here to take care of her for a while. I had to come, too." Cody wiped sweat from his forehead and leaned back, thankful for the blast of cold from the air conditioner. "Texas is a lot different from California."

Jake nodded. "Sure, it's different, which is probably a good plan."

Cody shrugged. "If there was a plan, then Texas must have been Plan B."

Jake laughed. "You don't like Texas? I'm surprised. Most people like it. We get a lot of visitors. I read the other day that if you laid all the people who came to visit the Alamo end to end, the line would stretch around the world."

"And if you laid all the people who brag too much about Texas end to end . . ." Cody paused. "They'd deserve it."

Jake laughed again as he turned onto Longmont. "That's a good joke. Where'd you get it?"

Cody turned to him, surprised. "I didn't get it anywhere. I made it up." He pointed to an older, cream-trimmed one-story brick house, sandwiched between two large, more recently built two-story homes. "That's my grandmother's house."

Jake parked in front of the house and pulled out his wallet. "I'd like to buy your joke," he said.

"I play sax and sit in with a combo most weekend nights at a club over on Richmond," Jake told Cody. "They usually have a stand-up comic for entertainment, and once a month they hold open-mike night, when anyone can try out a routine. I love my police work and I love playing music, but I've always wanted to be a comedian. The thing is, comedians need material. Good material. Jay Leno and David Letterman don't come up with their opening monologues on their own. They pay a whole bunch of writers to make up those jokes."

Cody was interested. He wasn't allowed to stay up late on school nights, but on Friday he stayed up long enough to hear the Top Ten List on Letterman, and on Saturdays his mom let him watch Saturday Night Live. "How come you want to be a stand-up comic?" he asked. It was hard enough for him to think of a cop as a musician. It was really stretching it to imagine a cop making people laugh! And Jake didn't look like a comic. He looked like what he was--a big, tough police officer.
From the Hardcover edition.

1. Laugh Till You Cry