Items related to Going After Cacciato 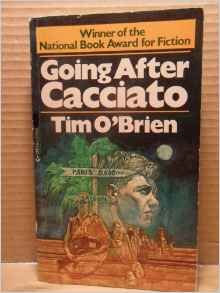 "To call Going After Cacciato  a novel about war is like calling Moby  Dick a novel about whales." So wrote  The New York Times of Tim O'Brein's  now classic novel of Vietnam. Winner of the 1979  National Book Award, Going After  Cacciato captures the peculiar blend of horror and  hallucinatory comedy that marked this the strangest  of wars. Reality and fantasy merge in this  fictional account of one private's sudden discussion to  lay down his rifle and begin a quixotic journey  from the of Indochina to the streets of Paris. Will  Cacciato make it all the way? Or will he be yet  another casualty of a conflict that seems to have no  end? In its memorable evocation of men both  fleeing and meeting the demands of the battle,  Going After Cacciato stands as much more  than just a great war novel. Ultimately it's about  the forces of fear and heroism that do battle in  the hearts of us all.

"In October, near the end of the month, Cacciato left the war."

In Tim O'Brien's novel Going After Cacciato the theater of war becomes the theater of the absurd as a private deserts his post in Vietnam, intent on walking 8,000 miles to Paris for the peace talks. The remaining members of his squad are sent after him, but what happens then is anybody's guess: "The facts were simple: They went after Cacciato, they chased him into the mountains, they tried hard. They cornered him on a small grassy hill. They surrounded the hill. They waited through the night. And at dawn they shot the sky full of flares and then they moved in.... That was the end of it. The last known fact. What remained were possibilities."

It is these possibilities that make O'Brien's National Book Award-winning novel so extraordinary. Told from the perspective of squad member Paul Berlin, the search for Cacciato soon enters the realm of the surreal as the men find themselves following an elusive trail of chocolate M&M's through the jungles of Indochina, across India, Iran, Greece, and Yugoslavia to the streets of Paris. The details of this hallucinatory journey alternate with feverish memories of the war--men maimed by landmines, killed in tunnels, engaged in casual acts of brutality that would be unthinkable anywhere else. Reminiscent of Joseph Heller's Catch-22, Going After Cacciato dishes up a brilliant mix of ferocious comedy and bleak horror that serves to illuminate both the complex psychology of men in battle and the overarching insanity of war. --Alix Wilber

"Simply put, the best novel written about the war. I do not know any writer, journalist, or novelist who does not concede that position to O'Brein's Going After Cacciato " -- The Miami Herald.