Items related to Story of Christopher Columbus, The

Story of Christopher Columbus, The 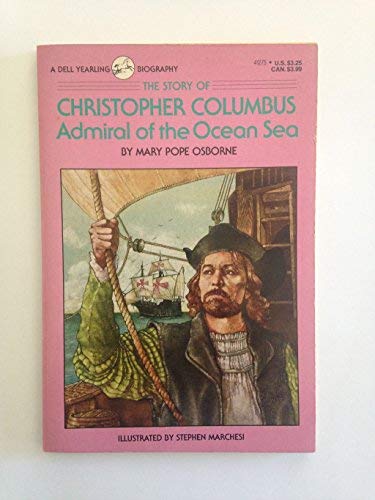 Grade 3-5 Osborne concentrates on the adult life and voyages of Christopher Columbus. She explains the religious and commercial reasons for the voy ages and discusses the disappointment felt by Columbus (and Spain) when it became clear that he had not reached the Far East, explaining that often his tory judges events differently than con temporary opinion. Osborne's writing is clear, and the style is like an adult biography, with historical analysis and perspective included. Careful research has been done, and there is a note about sources. This book is without the fic tionalizing and false heroics found in such books as Sperry's The Voyages of Christoper Columbus ( Random, 1950; o.p.) and the D'Aulaires' Columbus (Doubleday, 1955). Osborne presents Columbus as a hero, but also as a man who had both strengths and weakness es in his nature. In addition, Osborne shows no bias toward any group and explains how the behaviors of some groups which would now be considered unacceptable were accepted practices at the time. Her treatment of the Indi ans is fair. Black-and-white illustra tions add little to the text, and there is no index. Overall, this title would be a good addition to libraries needing biog raphies which are written from a mod ern standpoint and are without many of the prejudices and distortions common in older books for children. Mary Mueller, Rolla Jr . High School, Mo.
Copyright 1988 Reed Business Information, Inc.