Items related to Moxy Maxwell Does Not Love Stuart Little 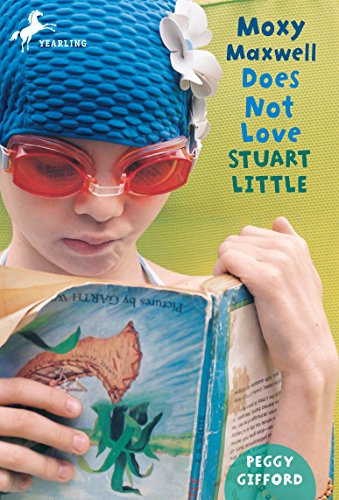 It wasn't as if Moxy hadn't tried to do her summer reading. She and Stuart Little had been inseparable all summer, like best friends. If Stuart Little wasn't in her backpack, it was in her lap . . . or holding up the coffee table . . . or getting splashed when Moxy went swimming. But now it's the end of August—the day before fourth grade. And if Moxy doesn't read all of Stuart Little immediately, there are going to be "consequences."

It may look like Moxy is doing nothing, but actually she is very busy with a zillion highly crucial things—like cleaning up her room (sort of) and training her dog and taking a much-needed rest in the hammock. Just look at the pictures her twin brother Mark takes to document it all—they're scattered throughout—and you'll see why it's so difficult to make time for a book about a mouse.

Of course our heroine does manage to finish her book, falling so in love with it that she finds herself reading under the covers with a flashlight, late into the night.

Peggy Gifford's original plan was to become a famous (but really nice) actress. But after touring Ohio as Winnie-the-Pooh, she decided to become a writer instead. She holds an MFA from the Iowa Writer's Workshop, and her work has appeared in the Iowa Review, the Antioch Review, and women's magazines like Redbook. This is her first novel for children. She lives in New York, New York and Myrtle Beach, South Carolina.

Valorie Fisher is the author-illustrator of How High Can a Dinosaur Count?, which recevied two starred reviews, among other titles. Her first two picture books, My Big Brother and My Big Sister—both Oppenheim Toy Portfolio Platinum Award winners—were, like Moxy Maxwell, illustrated with photographs. She lives in Cornwall, Connecticut.

Moxy Maxwell is a procrastinator. She was assigned Stuart Little for summer reading, but it is still unread on the last day before the first day of school. Moxy's mother is well aware of this lapse. Moxy won't be allowed to play the eighth daisy petal in the water ballet at the local pool if she hasn't finished the book by the time Mom returns home. Intentions are good, but events keep getting in the way. Moxy's room must be cleaned, and the dog has to be trained. She also takes time to ponder the idea of inventing a hammock that automatically stops swinging when the inhabitor gets off. She decides to plant a peach orchard (with bad results). All of this is documented with funny black-and-white photographs taken by Moxy's brother. The short, sassy chapters have an immediacy that may have readers wringing their hands as the clock ticks down. The scenerio will ring true for readers who may have put off a few homework assignments of their own. Cooper, Ilene

4. Moxy Maxwell Does Not Love Stuart Little (Paperback or Softback)