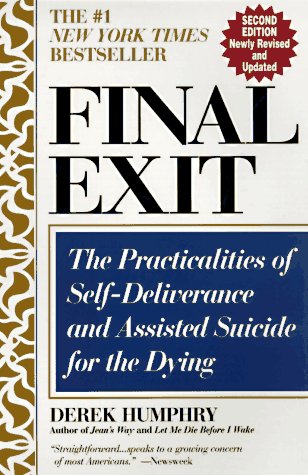 Standing at the center of a heated controversy and sparking national debate, Final Exit has become a crucial handbook for people looking to end their suffering from unbearable pain due to terminal or incurable illness. This careful, concise, and compassionate manual includes:

How to commit suicide with sleeping pills, preferably with the aid of a loved one
A chart listing lethal doses of fourteen drugs
Legal considerations, life insurance, and living wills
Finding the right doctor, hospice care, and pain control
Letters to leave behind and how to write a self-deliverance checklist
Psychological support groups for the dying and suicide hotlines for depression
Plus much more invaluable advice on self-deliverance and assisted suicide

For mature adults opting to end their lives or anyone interested in this controversial and timely topic, Final Exit, the only book of its kind, provides the answers.

Controversy should erupt anew when Humphry's suicide manual for the terminally ill, newly revised and expanded, tries to match in paper the successes that it enjoyed in cloth, including 18 weeks on PW's bestseller list.
Copyright 1992 Reed Business Information, Inc.

This second edition is replaced by a  new version in April 2010 known as edition 3.1 --Dell

Final Exit (Second Edition): The Practicalities of Self-Deliverance and Assisted Suicide for the Dying