Items related to Studies in Zen 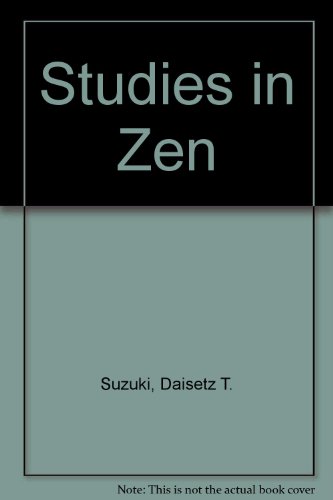 2013 Reprint of 1955 Edition. Exact facsimile of the original edition, not reproduced with Optical Recognition Software. This collection of essays reprints seven articles or lectures written by Suzuki beginning in 1906. The are: The Zen Sect of Buddhism Zen Buddhism An Interpretation of Zen-Experience Reason and Intuition in Buddhist Philosophy Zen: A Reply to Dr. Hu Shih Mondo The Role of Nature in Zen Buddhism Index

Daisetz Teitaro Suzuki was Japan's foremost authority on Zen Buddhism, and the author of over 100 works on the subject. He was trained as a Buddhist disciple in the great Zen monastery at Kamakura. From 1897 to 1908 he worked in the United States as an editor and translator, and later became a lecturer at Tokyo Imperial University. In 1950, at 80, he returned to the United States and spent most of the decade teaching, lecturing, and writing, particularly at Columbia and Harvard. Returning to Japan, he died in Tokyo in 1966 at the age of 95.
Christopher Reed has been teaching Buddhism and Buddhist meditation for 15 years. He received transmission as a Dharma teacher from Zen master Thich Nhat Hanh. He has been influenced by the tradition of socially/politically engaged Buddhism, and works toward the integration of traditional Buddhist teaching with the demands of everyday life. He is co-founder and director of the Ordinary Dharma Meditation Center in Los Angeles and the Manzanita Village Retreat Center in San Diego.
Christmas Humphreys was a prominent English barrister and the author of over 20 books on Buddhism.