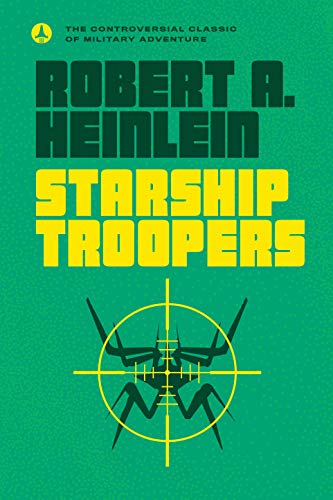 In Robert A. Heinlein’s controversial Hugo Award-winning bestseller, a recruit of the future goes through the toughest boot camp in the Universe—and into battle against mankind’s most alarming enemy...

Johnnie Rico never really intended to join up—and definitely not the infantry. But now that he’s in the thick of it, trying to get through combat training harder than anything he could have imagined, he knows everyone in his unit is one bad move away from buying the farm in the interstellar war the Terran Federation is waging against the Arachnids.

Because everyone in the Mobile Infantry fights. And if the training doesn’t kill you, the Bugs are more than ready to finish the job...

“A classic...If you want a great military adventure, this one is for you.”—All SciFi

Juan Rico signed up with the Federal Service on a lark, but despite the hardships and rigorous training, he finds himself determined to make it as a cap trooper. In boot camp he will learn how to become a soldier, but when he graduates and war comes (as it always does for soldiers), he will learn why he is a soldier. Many consider this Hugo Award winner to be Robert Heinlein's finest work, and with good reason. Forget the battle scenes and high-tech weapons (though this novel has them)--this is Heinlein at the top of his game talking people and politics.

JOIN THE ARMY AND SEE THE UNIVERSE!

In one of Robert Heinlein's most controversial bestsellers, a recruit of the future goes through the toughest boot camp in the Universe -- and into battle with the Terran Mobile Infantry against mankind's most alarming enemy!

Book Description Paperback. Condition: New. Paperback. The historians can't seem to settle whether to call this one "The Third Space War" (or the fourth), or whether "The First Interstellar War" fits it better. We just.Shipping may be from multiple locations in the US or from the UK, depending on stock availability. 279 pages. 0.376. Seller Inventory # 9780441014101