Items related to The Dragon Book: Magical Tales from the Masters of...

The Dragon Book: Magical Tales from the Masters of Modern Fantasy

The Dragon Book: Magical Tales from the Masters of Modern Fantasy 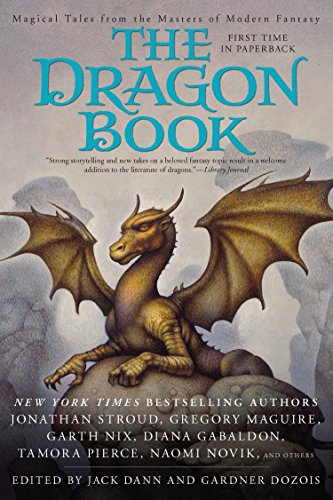 "Strong storytelling and new takes on a beloved fantasy topic result in a welcome addition to the literature of dragons." (Library Journal)

Gardner Dozois was the long-time editor of Asimov's Science Fiction Magazine. He won the Hugo Award for Best Editor over a dozen times during his tenure, and currently holds the position of Editor Emeritus with the magazine.

Nineteen distinctly different, atmospheric tales by modern-day fantasy writers, the likes of Garth Nix, Harry Turtledove, Bruce Coville, Tanith Lee, and Mary Rosenblum, make this a treasure trove for fantasy fans, especially dragon lovers. Cecelia Holland weighs in with a heroine reminiscent of Scheherazade, but here, it’s a dragon demanding the stories. In Jonathan Stroud’s “Bob Choi’s Last Job,” a dragon hunter comes up against a voracious shape-shifter. Liz Williams offers a mannered story in which a mage, summoned to vanquish a worm, encounters the unexpected. Nix depicts a radioactive man/dragon. In case you’re wondering what a police officer is to do when a large dragon plops down in a busy Oakland intersection, Peter S. Beagle has the answer. Tad Williams’ dragon tells her children the story of how in days of yore, when dragon-slayers existed, a “stark and wormy knight” came to slay her ancestor and rescue a damsel. All in all, an enticing collection for genre fans. --Sally Estes

1. The Dragon Book: Magical Tales from the Masters of Modern Fantasy