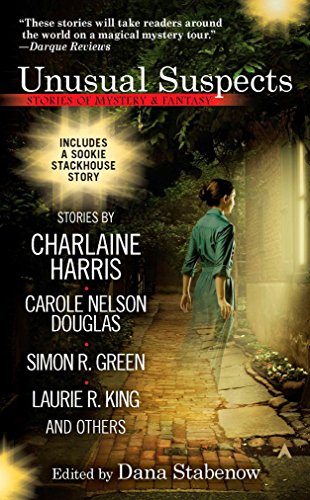 Dana Stabenow is the Edgar Award-winning author of Fire and Ice, So Sure of Death, and several other acclaimed mysteries. She lives in Anchorage, Alaska.

Evidently enough of you enjoyed Powers of Detection so much that Ginjer Buchanan at Ace Science Fiction thought a second collection was a good idea. On behalf of all the authors included herein, thank you!

Most of the usual suspects are back, with the addition of Michael Stackpole and Carole Nelson Douglas. Who would want to kill Sam Spade? Carole's got an answer for that, and Michael's got a new take on scapegoats that, okay, I know somebody gets killed and that's a bad thing, but I'm still laughing as I write these words.

Laurie King and Sharon Shinn offer up ghost stories, both with a very high goosebump index. Interesting how the spookiest stories often have the least amount of gore.

Donna Andrews returns to the Westmarch College of Magical Studies and the adventures of Gwynn the apprentice, who this time saves master mage Justinian from a fate worse than death. Charlaine Harris returns to Bon Temps, Louisiana, where the vampires are out by night and the insurance agents by day. What's the difference, really? Sookie Stackhouse knows.

Laura Anne Gilman introduces us to a cave dragon for a loan shark, and Simon Green takes us back into the Nightside for a grim little tale of justice delayed but not denied. Mike Doogan, tongue firmly in cheek, magicks up a traveling salesman story, Michael Armstrong indulges in a little global wishful thinking, and John Straley tells us where Santa Claus really goes during the off season.

Myself, I went back to Mnemosynea, for another tale of Seer and Sword. Turns out I like that world so much the Mage Guild commissioned me to write a Mnemosynean world almanac. I've even got a map now. And I admit, the ending of "A Woman's Work" involves a little wishful thinking of my own.

The great thing about fantastical fiction is its ability to put any ending on a question beginning "What if?" What if Santa goes Down Under on vacation? What if a cave dragon loan shark wants to make good on an investment? What if video games achieve the level of reality, what rights belong to the characters created therein?

In her introduction to The Norton Book of Science Fiction, Ursula K. LeGuin wrote, "In a story where only what ordinarily occurs is going to occur, one can safely use such a sentence as, 'He was absorbed in the landscape.' In a story where only the story tells you what is likely to happen, you had best be careful about using sentences like that."

And of course the great thing about crime fiction, aside from the universal human love of a mystery, is that by the end there is always a resolution, and, sometimes, justice.

Put murder in a fantasy setting, and "If you die, I'll kill you!" becomes a credible threat.

At least in here. Be careful how you go.