Items related to Poe Must Die 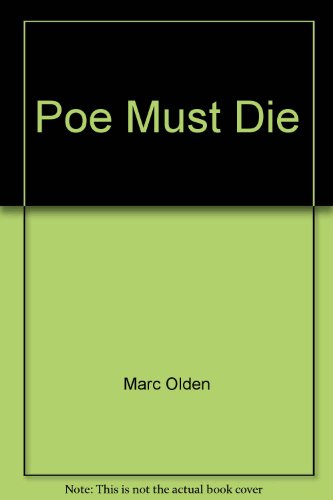 Against a backdrop of New York City in the 1840’s, a hellhole of crime and squalor, Edgar Allan Poe plays out a deadly game, fighting not only the demonic forces waged against him, but also his personal demons, the memory of his beloved wife and the alcohol he consumes in order to forget her. Pierce James Figg, a renowned ex-bare knuckle fighter, has arrived in New York from London carrying with him a letter of introduction from Charles Dickens to Edgar Allan Poe. Figg is pursuing Jonathan the sorcerer and spiritualist. The man who brutally murdered his wife. Jonathan seeks the Throne of Solomon which will grant him immortality and dominion over Lucifer, Asmodeus and all the demons of the upper air. His search has led him to New York. Frail, gallant Edgar Allan Poe and the grieving, brilliant boxer unite in a perilous mission to find and destroy Jonathan before he can achieve his goal of controlling Lucifer and thereby change the destiny of the world. i."...a provocative, emotionally charged portrait ... full of ominous impulses ... let's have more of them!"i. -- Baltimore Sun

The author of forty published books, most in the suspense-thriller category, Marc Olden was recognized since the beginning of his career as a masterful crime novelist, acclaimed as “superior to just about all thriller writers for knockout characterizations and superbly whimsical dialogue...” and “a master of intrigue and adventure”. Kirkus Reviews and Publisher’s Weekly have described his books as “unfailingly readable”, and “difficult to put down”, "whose menace and tension flatten the reader's nose to the page while snapping his fingers", with writing that is “razor-sharp but oh-so-lyrical ...” Olden’s novels have always reflected his diversity of interests and experience. His study of the life and works of Edgar Allan Poe resulted in one of his most well known and highly regarded mysteries, POE MUST DIE. Many of Olden’s books, such as the eastern influenced GIRI, DAI-SHO, GAIJIN, ONI, TE, KISAENG and KRAIT, reflect his life-long passions for justice and eastern culture and philosophy. Clive Custler said that “no one has plumbed the secrets of the Orient with near the imagination”. And about GAIJIN Tom Clancy wrote “...everything a thriller needs is right here ...” with “fascinating characters, an intricate plot, and a blistering pace.” Early in his career Olden was nominated for the coveted Edgar Award for THEY’VE KILLED ANNA, from his popular HARKER FILE series about an investigative reporter, and in 2000 Olden was presented with the Literary Fiction Honor Award by the Black Caucus of the American Library Association for his crime novel, THE GHOST. ~~~