Items related to M.C. Escher: Art and Science (Proceedings of the Internation... 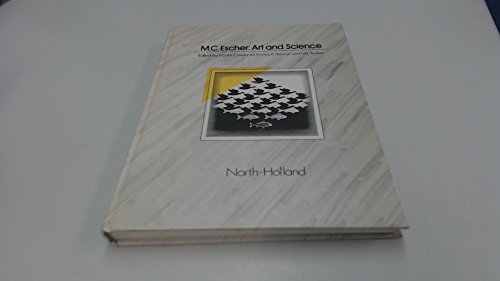 Escher broke down the boundaries between art and science by combining complicated mathematics with precise draftsmanship and an eye for the unusual. His work is a combination of intricate realism and fantasy. He is most famous for his 'impossible constructions', images which utilize mathematical shapes, architecture, and perspective to create a visual enigma, but he also produced subtle and original work drawing inspiration from the Italian landscape. Most of Escher's art was produced as prints - lithographs or woodcuts and its appearance and subject matter was quite unique at a time when abstract art was the norm. Despite not having a formal mathematical training, Escher had an intuitive and nuanced understanding of the discipline. He used geometry to create many of his images and incorporated mathematical forms into others. Additionally, some of his prints provide visual metaphors for abstract concepts particularly that of infinity, the depiction of which Escher became interested in later in his career. This 402-page book contains chapters such as : Escher and Symmetry; Escher, Mathematics and Visual Perception; Escher, Cinema and Computer Graphics; Escher and the Physical World; Escher and the Humanities. Dozens of photos, illustrations and reproductions of Escher's work are seen throughout along with detailed text.