Items related to The Godforsaken 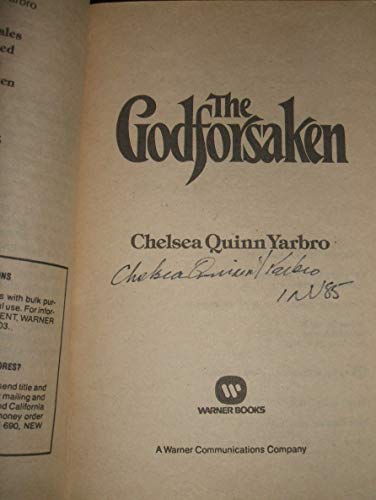 Cursed by the devil, Rolon, the heir to King Alonzo's throne, becomes a hound of hell who terrorizes the countryside of Inquisition Spain

Chelsea Quinn Yarbro is the first woman to be named a Living Legend by the International Horror Guild and is one of only two women ever to be named as Grand Master of the World Horror Convention (2003). In 1995, Yarbro was the only novelist guest of the Romanian government for the First World Dracula Congress, sponsored by the Transylvanian Society of Dracula, the Romanian Bureau of Tourism and the Romanian Ministry of Culture. Yarbro is best known as the creator of the heroic vampire, the Count Saint-Germain. With her creation of Saint-Germain, she delved into history and vampiric literature and subverted the standard myth to invent the first vampire who was more honorable, humane, and heroic than most of the humans around him. She fully meshed the vampire with romance and accurately detailed historical fiction and filtered it through a feminist perspective that both the giving of sustenance and its taking were of equal erotic potency. A professional writer since 1968, Yarbro has worked in a wide variety of genres, from science fiction to westerns, from young adult adventure to historical horror.