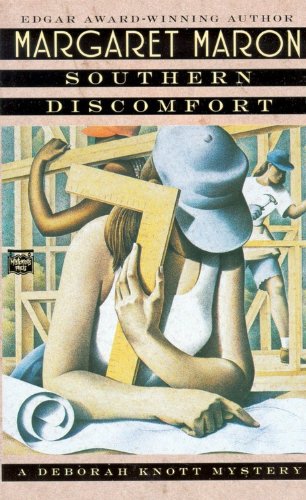 The heroine of Bootlegger's Daughter returns. Deborah Knott, a newly-appointed District Judge, is making good on a campaign promise by helping to build houses for battered women. But instead of muscle aches, she gets murder--and her fingerprints are on the murder weapon.

MARGARET MARON grew up on a farm near Raleigh, North Carolina, but for many years lived in Brooklyn, New York. When she returned to her North Carolina roots with her artist-husband, Joe, she began a series based on her own background. The first book, Bootlegger's Daughter, became a Washington Post best-seller that swept the major mystery awards for its year and is among the 100 Favorite Mysteries of the Century as selected by the Independent Mystery Booksellers Association. Later Deborah Knott novels Up Jumps the Devil, Storm Track, and Three-Day Town each won the Agatha Award for Best Novel. In 2008, Maron received the North Carolina Award for Literature, the state's highest civilian honor. And in 2013, The Mystery Writers of America celebrated Maron's contributions to the mystery genre by naming her a Grand Master-an honor first bestowed on Agatha Christie. In 2016, she was inducted into the North Carolina Literary Hall of Fame. To find out more about the author, you can visit MargaretMaron.com. Ebooks are available on Amazon and Barnes & Noble.

New lady judge Deborah Knott ( Bootlegger's Daughter ) threads her way through the intricacies of district court in a small North Carolina town where familial connections abound. Murder rears its ugly head only after shared family stories and relationships establish a stylistic context. Employing her intimate knowledge of the place, Knott discovers who assaulted her teenage niece and killed a randy building inspector inside an unfinished WomenAid house. Cleverly told, with a homey atmosphere, this is ripe for a sequel.
Copyright 1993 Reed Business Information, Inc.