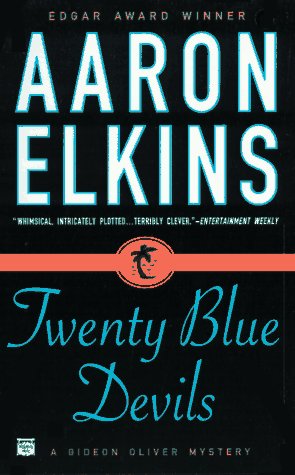 The investigation into the suspicious death of a coffee plantation owner poses more questions that answers for anthropologist/sleuth Gideon Oliver as he risks his own life to find the evil that is poisoning Paradise. Reprint.

Brew up a pot of your favorite gourmet java and enjoy the latest adventure of forensic anthropologist Gideon Oliver, who this time around exercises his wits on a coffee plantation in Tahiti. Aaron Elkins has a sharp, cool eye for detail; his descriptions of a flawed tropical paradise going through some serious business changes ring true. And the family that runs the coffee plantation has enough diversity to keep everyone guessing about the death of one of its members until the last drop. To bone up on Gideon Oliver in paperback, try: The Dark Place, Dead Men's Hearts, Fellowship of Fear, Icy Clutches, Make No Bones, Murder in the Queen's Armes, and Old Bones.

Aaron Elkins is a former anthropologist and professor who has been writing mysteries and thrillers since 1982. His major continuing series features forensic anthropologist-detective Gideon Oliver, “the Skeleton Detective.” There are fifteen published titles to date in the series. The Gideon Oliver books have been (roughly) translated into a major ABC-TV series and have been selections of the Book-of-the-Month Club, the Literary Guild, and the Readers Digest Condensed Mystery Series. His work has been published in a dozen languages.
Mr. Elkins won the 1988 Edgar Award for best mystery of the year for Old Bones, the fourth book in the Gideon Oliver Series. He and his cowriter and wife, Charlotte, also won an Agatha Award, and he has also won a Nero Wolfe Award. Mr. Elkins lives on Washington’s Olympic Peninsula with Charlotte.