Items related to The Wedding 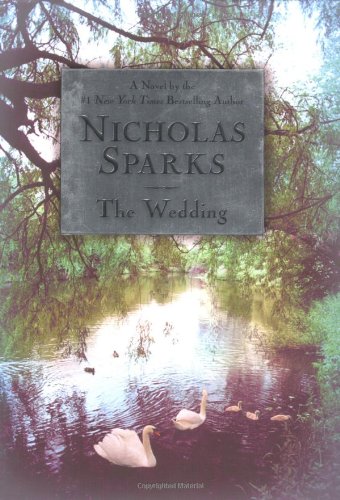 With the preparations for his daughter's upcoming wedding serving as a catalyst, Wilson Lewis realizes that his relationship with his wife of thirty years is threatened and, with his in-laws' fifty-year love affair as an example, sets out to make his wife fall in love with him once again. 1,250,000 first printing.

Nicholas Sparks lives in North Carolina with his wife and family.

Tom Wopat depicts Wilson Lewis's crumbling relationship with his wife, June. Using strong characterizations, Wopat seamlessly switches from male to female roles as June grows to believe that her twenty-nine-year marriage is over. Instead of arguing when Lewis forgets their wedding anniversary, Wopat shows June's depression through sighs, half-uttered sentences, and flat tones. Lewis truly loves June, and, with the same devotion he gives to work, he now sets about winning back his wife. This intense love story portrays the dilemma of feeling taken for granted by the most important person in one's life and ends with a dramatic twist that brings a smile. G.D.W. © AudioFile 2004, Portland, Maine-- Copyright © AudioFile, Portland, Maine

Book Description Condition: New. This is a brand new book! Fast Shipping - Safe and Secure Mailer - Our goal is to deliver a better item than what you are hoping for! If not we will make it right!. Seller Inventory # 1XGHD4000AG5_ns

Book Description Warner Books Inc, Boston, Massachusetts, U.S.A., 2003. Hardcover. Condition: New. Dust Jacket Condition: New. 1st Edition. New Unread Hardcover. 1st Edition- per ABE Books. 3rd Printing-number line starts at 3. Not price clipped. Not a remainder. BEAUTIFUL copy of Book and Dust-Jacket. This book came in a Box as a promotion from the Publisher Jamie Raab of Warner Books. There is a letter from Jamie, a Wedding Veil-The book is wrapped in. And tissue paper with a wedding bells sticker. The tissue paper is torn where the sticker is. COLLECTOR'S COPY. Seller Inventory # 001014