Items related to Under a Texas Sky

Garlock, Dorothy Under a Texas Sky

Under a Texas Sky 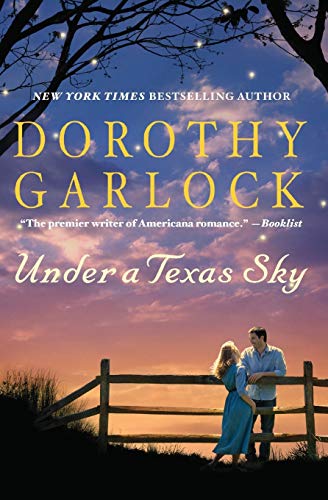 Growing up poor and largely abandoned on the streets of 1920s Chicago, Anna Finnegan has struggled her entire life. Until a talent manager discovers her and brings her into the world of theater. Now years later she's about to start shooting her first movie. Arriving on location in Redstone, Texas, in 1932, Anna steps off the train and collides into Dalton Barnes. He's lived in Redstone all his life and hates how the big city out-of-towners are gawking at the small-town locals like him. It doesn't take long, though, for Anna and Dalton to discover fireworks of a different sort between them. But the movie is plagued by one trouble after another, including a fire that destroys an elaborate set and costumes ruined by huge splashes of paint. Who is sabotaging the film and why? To what lengths will they go? When Anna finds herself threatened, how will she and the love blossoming between her and Dalton survive?

Dorothy Garlock is the author of over 50 novels that have sold over 15 million copies and are published in 15 languages. She lives in Iowa.

Young actress Anna Finnegan is plucked from obscurity in a St. Louis theater to play the lead in a Hollywood western. Shot on location in hardscrabble Redstone, Texas, the film is being sabotaged by an unknown person who has hired local criminals to set fires, steal, and create mayhem on the set. If that’s not enough excitement, Anna is also fending off advances from a lecherous costar and bullying from the other female lead. Off set, she manages to fall for the local blacksmith, Dalton Barnes, who is hardworking, handsome, fiercely proud, and not at all interested in the trappings of Hollywood. Dalton and Anna come up with a plan to expose the saboteur, save the movie, and live happily ever after. Set during the Prohibition era and replete with stereotypical Hollywood and western characters, the latest from romance doyenne Garlock mixes light suspense with traditional romance for an entertaining effect. --Aleksandra Walker

1. Under a Texas Sky

2. Under a Texas Sky

3. Under a Texas Sky

Book Description Grand Central Publishing. PAPERBACK. Condition: New. 0446540218 Book is in perfect condition and will be SHIPPED WITHIN 24 hours of receiving the order! *** IF I have multiple copies, COVERS COULD BE DIFFERENT; IF important please ask. ***. Seller Inventory # BX18-1932

4. Under a Texas Sky

5. Under a Texas Sky (Paperback or Softback)

6. Under a Texas Sky

7. Under a Texas Sky

8. Under a Texas Sky

9. Under a Texas Sky