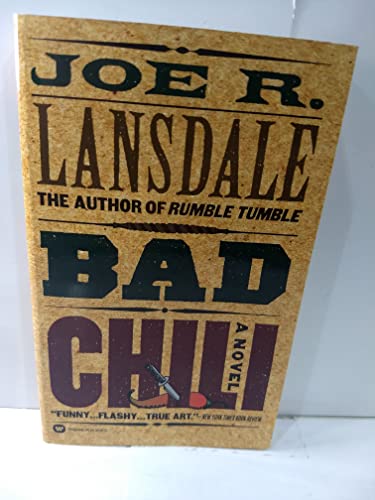 The author of The Two-Bear Mambo serves up a gritty, bawdy, action-packed Texas thriller involving a black, gay protagonist, a chili chef, a femme fatale, a rabid squirrel, a tornado, and several corpses. Reprint.

Hap Collins is in a LaBorde, Texas, hospital recuperating from an attack by a rabid squirrel and wondering why his best friend, Leonard Pine, hasn't been by to visit. Turns out that Leonard was upset enough about his boyfriend Raul leaving him for another guy that he went down to the biker bar this guy hangs out at and beats him with a broom handle. When the biker turns up dead later that night, it doesn't take long to guess who the primary suspect is--especially with Leonard nowhere to be found.

After Hap checks himself out of the hospital and finds Leonard hiding in his bed, the fourth novel in this series kicks into high gear--or what passes for high gear in Lansdale's deceptively laid-back storytelling style. Pretty soon, they've stumbled onto a conspiracy involving gaybasher pornography, and Leonard's ready to exact some vigilante justice over Hap's protestations: "There's few people think a roach exterminator is a murderer. I'm not talkin' about beatin' up and rapin' innocent people who are lookin' for love in all the wrong places. I'm talkin' about stampin' out a plague, man.... I've heard you rave about the horrors of the child sex trade in Thailand, the poor, the plight of blacks and women and gays, and all the stuff you gripe about, but me, I'm gonna do somethin'."

Add in a budding romance between Hap and Brett Sawyer, the nurse who tells him on their first date about how she set her abusive husband on fire--which impresses him much more than it scares him--and you've got the makings of another classic Lansdale thriller. --Ron Hogan

Where does Mojo storytelling come from? How does a fella learn tospin over-the-top yarns of any sort: horror, suspense, humor, science fiction, Western, what have you? First you got to see the world, like champion Mojo storyteller Joe R. Lansdale, who has lived everywhere from Gladewater, Texas to Mount Enterprise, Texas to Nacogdoches, Texas! "Texas is so wrapped up in myth and legend, it's hard to know what the state and its people are really about," says Lansdale. "Real Texans, raised on these myths and legends, sometimes become legends themselves. The bottom line is, Texas and its people are pretty much what most people mean when they use the broader term 'America.' No state better represents the independent spirit, the can-do attitude of America, better than Texas." The second ingredient to good Mojo storytelling is learning how to take a punch. Or a kick. Or a poke in the eye. And then learning how to avoid them. Lansdale is a student of the martial arts for more than thirty years. He's a two-time inductee into the International Martial Arts Hall of Fame, one such honor bestowed upon him for his founding of Shen Chuan, Martial Science. He holds belts in Daito Ryu Aikijujutsu, Combat Hapkido, American Combat Kempo, and Aikido, amongst others; in fact, his standard day is six hours at the typewriter, three hours at Lansdale's Self Defense Systems, the martial-arts studio which he owns and at which he teaches. With more than twenty books to his credit-and 200 short stories-Joe R. Lansdale is the champion Mojo storyteller. He's been called "the Stephen King of Texas" by Texas Monthly; "an immense talent" by Booklist; "a born storyteller" by Robert Bloch; and The New York Times Book Review declares he has "a folklorist's eye for telling detail and a front-porch raconteur's sense of pace." He's won umpty-ump awards, including five Bram Stoker horror awards, a British Fantasy Award, the American Mystery Award, the Horror Critics Award, the "Shot in the Dark". International Crime Writer's award, the Booklist Editor's Award, the Critic's Choice Award, and a New York Times Notable Book award. He's got the most decorated mantle in all of Nacogdoches! Lansdale lives in Nacogdoches, Texas, with his wife, Karen-an occasional writer and editor-and their son and daughter, Keith and Kasey.