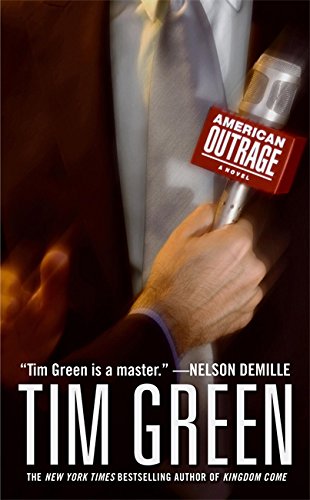 Jake Carlson, a correspondent for the TV news show AMERICAN OUTRAGE, inhabits a world of sensational trials and crazed celebrities. One of the nation's top journalists, he's used to dragging himself into the dirt to get the truth. When his adopted son Sam asks him to use his muckraking talents to find his birth mother, Jake is stunned by the ugly secrets he uncovers: an international crime syndicate, a horrifying child trafficking ring, and a corrupt politician, the patriarch of an old New York financial dynasty.

Initially galvanized by a career-making story, Jake---and his son---are soon the victims of brutal violence and the targets of Jake's fellow reporters, who dog them for their story. Concerned for the survival of his family, Jake realizes some sins of the past should never be uncovered...

Tim Green has written eleven previous thrillers and the nonfiction New York Times bestseller THE DARK SIDE OF THE GAME. He played eight years in the NFL and is a member of the New York State Bar. Today he is a featured commentator on NPR and FOX Sports. He lives with his wife and four children in upstate New York. For more information about the author visit: http://www.timgreenbooks.com.

Sure, Jake Carlson is making big bucks as a reporter on the tabloid news show I^ American Outrage, but the former foreign correspondent is ashamed of his job, and his personal life is a mess, too. Widowed for a year, he's struggling to keep his 13-year-old adopted son, Sam, on the straight and narrow. Jake finds a renewed sense of purpose, though, when Sam convinces him to help find his birth mother. He knows the hunt will be difficult, but he doesn't realize just how challenging until he starts asking questions. The head of the agency Jake used for the adoption had died, and there's no trace of the agency, which had been operating slightly under the radar, funneling babies from Albania to the U.S. for couples desperate for children. As Jake attempts to tie his investigation into a story to bolster his waning popularity at I^ American Outrage, he and Sam become the target of violence and revenge. Genre veteran Green hits his stride here, with his best novel since his early football thrillers (I^ Outlaws, 1996). Mary Frances Wilkens
Copyright © American Library Association. All rights reserved