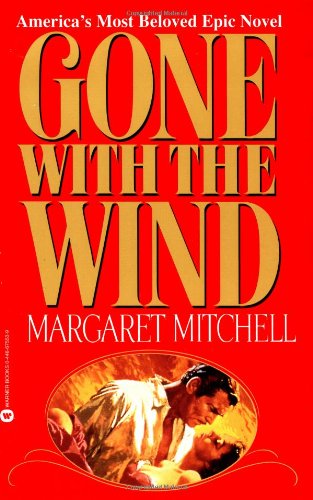 The tumultuous romance of Scarlett O'Hara and Rhett Butler is set against the backdrop of the elegance of the antebellum South, the ravages of the Civil War, and the desperate struggle of Reconstruction. Reprint.

Born in Atlanta in 1900, Margaret Mitchell grew up surrounded by relatives who told endless tales of the Civil War and Reconstruction. She knew those who were relics of a de-stroyed culture, and those who had put aside gentility for survival. Her mother instilled in her that education was her only security. She attended Smith College but had to come home when her mother fell ill. After her mother's death, Margaret resolved that she had to make a home for her father and brother, so she left college and returned to Atlanta.

In 1923, she became a feature writer for the Atlanta Journal, and in 1925, she married John Marsh, a public relations officer for Georgia Power. She found most of her assignments unfulfilling, and she soon left to try writing fiction more to her own taste. Her own harshest critic, she would not try to get her work published. She began to write Gone with the Wind in 1926, while recovering from an automobile accident. Over the next eight years she painstakingly researched for historical accuracy.

She accumulated thousands of pages of manuscript. Here is how she later described her life's labor: "When I look back on these last years of struggling to find time to write between deaths in the family, illness in the family and among friends which lasted months and even years, childbirths (not my own), divorces and neuroses among friends, my own ill health and four fine auto accidents ... it all seems like a nightmare. I wouldn't tackle it again for anything. Just as soon as I sat down to write, somebody I loved would decide to have their gall-bladder removed. ... "

In 1934, an editor from Macmillan's Publishers came to Atlanta seeking new authors. He was referred to John and Margaret Marsh as people who knew Atlanta's literary scene. She steered him to several prospects, but didn't mention her own work. A friend told him that she was writing a novel, but she denied it. On the night before he was to leave Atlanta, she appeared at his hotel-room door with her still imperfect, mountainous manuscript and left it with him for better or for worse.

The rest of the story is well-known