Items related to One Magical Sunday: (But Winning Isn't Everything)

One Magical Sunday: (But Winning Isn't Everything) 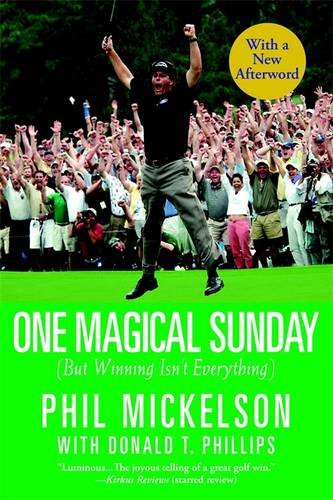 For years Phil Mickelson symbolized the classic runnerup
in the golf world, always placing near the top of
every tournament, always near the top of the money
list, but never reaching the pinnacle of winning one of
the Majors. Then finally, on one magical Sunday, Phil's
dream came true as he sank an 18-foot putt on the 18th
hole to win the 2004 Masters. Mickelson leapt into the
air in total celebration--and an entire nation of golfing
fans leapt in joy with him. ONE MAGICAL SUNDAY
journeys hole-by-hole with Phil on that fateful day,
weaving the story of his life into the game--from his
introduction to golf at the age of three to starting a
family and pro golf career.

PHIL MICKELSON lives in Arizona with his family.

Mickelson was long known as "golf's most lovable runner-up" until he finally won the Masters in 2004... He's become a crowd favorite second only to Tiger Woods not only because of his dry spell but also because of his legendary work ethic. Indeed, he begins this book by describing his famous pretournament routine of hitting 100 three-foot putts in a row without missing, no matter how many shots it takes. This and other insights into the methods of a pro golfer are the most fascinating parts of Mickelson's text. Each of the 18 chapters begins and ends with detailed descriptions of how Mickelson played each hole of his Masters' victory (e.g., how he "analyzed the shot dispersion patterns for both right-handed and left-handed golfers" to figure out that the tournament's 12th hole is "set up perfectly for a left-handed player" such as himself). However, the bulk of the book is devoted to the story of Mickelson's life. Although these passages are often moving (concerning his battle to overcome a deep playing slump and his wife's nearly fatal delivery of their third child), the story is marred by frequent generalizations like "success is more rewarding when it is difficult to achieve" and "picking your life partner is a critical decision" for "personal happiness." More golfing and fewer inspirational insights would've strengthened Mickelson's eventually triumphant tale.
Copyright © Reed Business Information, a division of Reed Elsevier Inc. All rights reserved.

1. One Magical Sunday: (But Winning Isn't Everything)

2. One Magical Sunday: (But Winning Isn't Everything)

3. One Magical Sunday: (But Winning Isn't Everything)

4. ONE MAGICAL SUNDAY: (BUT WINNING

5. ONE MAGICAL SUNDAY: (BUT WINNING