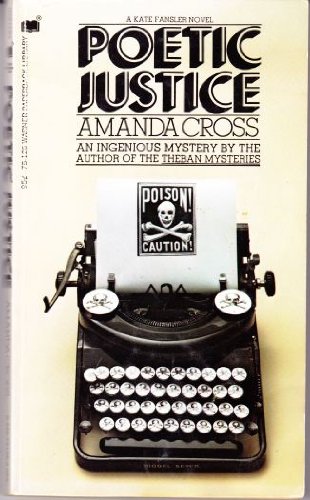 Student riots have ravaged the distinguished New York City university where Kate Fansler teaches.  In the ensuing disarray, the survival of the university's plebeian stepchild, University College, seems doubtful. President Jeremiah Cudlipp is snobbishly determined to ax it; and as sycophantic professors fall in line behind him, the rally of Kate and few rebellious colleagues seems doomed. It is a fight to the death, and only a miracle--or perhaps a murder--can save their beloved institution. . . .

Amanda Cross is the pseudonymous author of the bestselling Kate Fansler mysteries. As Carolyn G. Heilbrun, she is the Avalon Foundation Professor in the Humanities Emerita at Columbia University. She has served as president of the Modern Language Association as well as vice president of the Authors Guild. Dr. Heilbrun is also the author of Writing a Woman's Life, Hamlet's Mother and Other Women, The Education of a Woman: The Life of Gloria Steinem, and The Last Gift of Time: Life Beyond Sixty.

Though mild clear weather
Smile again on the shire of your esteem
And its colors come back, the storm has changed you:
You will not forget, ever,
The darkness blotting out hope, the gale
Prophesying your downfall.

One
That classes at the University began, as they were scheduled to, on
September 17, was a matter of considerable astonishment to everyone. There
was not a great deal to be said for revolutions--not, at any rate, in
Kate's opinion--but they did accustom one to boredom in the face of
extraordinary events, and a pleasant sense of breathless surprise at the
calm occurrence of the expected. Kate said as much to Professor Castleman
as they waited for the elevator in Lowell Hall.

"Well," he answered, "I might have found myself even more overcome with
amazement if they had not managed to put my course in historical methods,
which never has less than a hundred and fifty students, into a classroom
designed to hold ninety only if the students sit two in a chair, which,
these days, they probably prefer to do. Though come to think of it," he
added as the elevator, empty, went heedlessly past, apparently on some
mysterious mission of its own, "I don't know why students should expect
seats at lectures, since audiences can no longer expect them at the
theater. We went to a play last night--I use the word 'play,' you
understand, to describe what we expected to see, not what we saw--and not
only were there no seats, the entertainment principally consisted of the
members of the cast removing their clothes and urging, gently of course,
that the audience do likewise. My wife and I, fully clothed, felt rather
like missionaries to Africa insufficiently indoctrinated into the antics
of the aborigines. Shall we walk down? One thing at least has not changed
in this university: the elevators. They have never worked, they do not now
work, and though an historian should never speak with assurance of the
future, I am willing to wager that they never will. Where are you off to?
Don't tell me, I know. A meeting. What's more, I can tell you what you are
going to discuss: relevance."

"That," said Kate, "would be the expected. As a matter of fact, I have a
doctoral examination: the poetry of W. H. Auden. He wrote a good bit of
clever poetry to your muse."

"Mine? Gracious, have I got a muse? Just what I've needed all these years.
Do you think I could trade her in for a cleaning woman, three days a week
with only occasional ironing? My wife would be prostrate with gratitude."

"Trade Clio in? Impossible. It is she into whose eyes 'we look for
recognition after we have been found out.' "

"Did Auden write that? Obviously he's never been married. That's a
description of any wife. I thought you were in the Victorian period."

"I am, I am. Auden was born in 1907. He only missed Victoria by six years.
And don't be so frivolous about Clio. Auden called her 'Madonna of
silences, to whom we turn When we have lost control.' "

"Well, get hold of her," Professor Castleman said. "I'm ready to turn."
The dissertation examination was not, in fact, scheduled for another hour.
Kate wandered back toward her office, not hurrying, because no sooner
would she reach Baldwin Hall, in which building dwelt the Graduate English
Department, than she would be immediately accosted, put on five more
committees, asked to examine some aspect of the curriculum about which she
knew nothing (like the language requirement for medieval studies) and to
settle the problems of endlessly waiting students concerning, likely as
not, questions not only of poetry and political polarization, but of pot
and the
pill as well. Kate strolled along in the sort of trance to which she had
by now grown accustomed. It was the result of fatigue, mental indigestion,
a sense of insecurity which resembled being tossed constantly in a blanket
as
much as it resembled anything, and, strangest of all, a love for the
University which was as irrational as it was unrewarded.

She would have been hard put to say, she thought looking about her, what
it was she loved. Certainly not the administration (had there been one,
which, since they had resigned one by one like the ten little Indians,
there wasn't). Not the Board of Governors, a body of tired,
ultraconservative businessmen who could not understand why a university
should not be run like a business or a country club. The students, the
faculty, the place? It was inexplicable. The love one shares with a city
is often a secret love, Camus had said; the love for a university was
apparently no less so.

"Kate Fansler!" a voice said. "How very, very nice. 'I must telephone
Kate,' I have said to Winthrop again and again, 'we must have lunch, we
must have dinner, we must meet.' And now, you see, we have."

Kate paused on the steps of Baldwin Hall and smiled at the sight of Polly
Spence. Talk of the unexpected! Polly Spence belonged to the world of
Kate's family--she had actually been, years ago, a protegee of Kate's
mother's--and there emanated from her the aura of St. Bernard's--where her
sons had gone to school--and Milton Academy, the Knickerbocker dancing
classes and cotillions.

"I know," Polly Spence said, "my instincts tell me that if I wait here
patiently you will say something, perhaps even something profound, like
'Hello.' "

"It's good to see you, Polly," Kate said. "I don't know what's become of
me. I feel like the heroine of that Beckett play who is buried up to her
neck and spends every waking moment rummaging around in a large,
unorganized handbag. Come to see the action, as the young say?"

"Action? Profanity, more likely. Four-letter-word-bathroom,
four-letter-word-sex, and really too tiresome, when I think that my own
two poor lambs were positively glared at if they said 'damn.' It's not an
easy world to keep up with."

"But if I know you, you're keeping up all the same."

"Of course I am. I'm taking a doctorate. In fact, I've almost got it. Now
what do you think of that? I'm writing a dissertation for the Linguistics
Department on the history of Verner's Law. Please look impressed. The
Linguistics Department is overjoyed, because the darlings didn't know
there was anything new to say about Verner's Law until I told them, and
they've been taking it like perfect angels."

Kate smiled. "I always suspected an extraordinary brain operating behind
all your committee-woman talents, but whatever made you decide to get a
Ph.D.?"

"Grandchildren," Polly said. "Three chuckling little boys, one gurgling
little girl, all under three. It was either hours and hours of
baby-sitting, to say nothing of having the little darlings cavalierly
dumped upon us at the slightest excuse, or I had to get a job that would
be absolutely respected. Winthrop has encouraged me. 'Polly,' he said, 'if
we are not to find ourselves changing diapers every blessed weekend, you
had better find something demanding to say you're doing.' The children, of
course, are furious, but I am now a teaching
assistant, very, very busy, thank you, and only condescending to rally
round at Christmas and Easter. Summers I dash off to do research and
Winthrop joins me when he can. But you look tired, and here I am chatting
away. Let's have lunch one day at the Cosmopolitan Club."

"Of course not, dear, though I never understood why. Why are you looking
so tired?"

"Meetings. Meetings and meetings. We are all trying, as you must have
heard, to restructure the University, another way of saying that we, like
the chap in the animated cartoons, have looked down to discover we are not
standing on anything. Then, of course, we fall."

"But everybody's resigned. The President. The Vice-President. We've got an
Acting President, we're getting a Faculty Senate, surely everything's
looking up."

"Perhaps. But the English Department has discovered there is no real
reason for most of the things they have been happily doing for years. And
the teaching
assistants--where, by the way, are you being a teaching assistant? Don't
tell me the College has reformed itself sufficiently to be hiring female,
no-longer-young ladies, however talented . . ."

"Not them; not bloody likely. I'm at the University College. Very
exciting. Really, Kate, you have no idea."

"Really," Polly Spence said, "the snobbery of you people in the graduate
school! We're doing splendid work over there . . ."

"Didn't the University College used to be the extension school? Odd
courses for people at loose ends like members of labor unions who only
work twenty hours a week and housewives whose children are . . . ?"

"That was a hundred years ago. There are no more courses in
basket-weaving. We give a degree, we have a chapter of Phi Beta Kappa, and
our students are very intelligent people who simply don't want to play
football or have a posture picture taken."

Book Description Warner Books. Paperback. Condition: Good. No Jacket. A copy that has been read, but remains in clean condition. All pages are intact, and the cover is intact. The spine may show signs of wear. Pages can include limited notes and highlighting, and the copy can include previous owner inscriptions. At ThriftBooks, our motto is: Read More, Spend Less. Seller Inventory # G044675126XI3N00