Items related to The Philosopher Stone 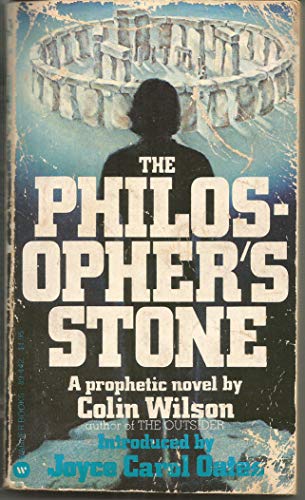 Third Printing, 1977. Clean and unmarked text. Pages are age toned. Spine is creased. Covers have light reading creases. Light edge wear. Tight and solid. We post pictures 24 hours after listing. So if you do not see a picture that has been provided by us, just check back in 24 hours. Please email us if you have any questions concerning shipping, or want more details regarding a certain book. We ship quickly via USPS. We also combine shipping on multiple item purchases. Email us for rates.

Wilson probably has earned a reputation more as a scholar and biographer than as a novelist; but this novel, originally published in 1969 and here rescued from obscurity by new-age publisher Jeremy P. Tarcher, proves that he possesses significant skills in the area of fiction as well. Wilson weaves a great deal of speculation into the meaning of human existence and the future of the species into the plot; so much so that the book at times seems as much a work of philosophy as of fiction. The story centers on the experiences of Howard Lester, an enterprising young intellectual whose work with fellow researcher Henry Littleway leads to the discovery that implanting a minute bit of a metallic alloy into the prefrontal cortex of the brain can introduce a higher state of conciousness. (As in the case with Carlos Castaneda in his thematically-similar Don Juan chronicles, the researchers later discover that the artificial catalyst is not necessary, but rather a convenient means to overcome years of conditioning). Lester and Littleway perform the operation upon themselves and proceed to refine their new skills until they are able to employ a sort of "time visioif 'that allows them to tap into racial memories. With this knowledge comes the realization that there are shadowy periods in our species' past that have been kept hidden from us by more powerful beings. Lester relates his moment of insight: "I knew with certainty that there is something in the world's prehistory that cannot be found in any of the books on the past. And it was obscurely connected with [a] sense of evil...." In the course of discovering how the Eardi-and mankind-truly evolved, this intriguing tale touches upon everything from Mayan civilization to Abraham Maslow to H.P. Lovecraft's elder Gods. -- From Independent Publisher

Purveyor of the occult, Wilson almost yearly produces fiction and nonfiction works that achieve popular if not critical success. This novel was first published here in 1971; it is being reissued, with a foreward by Joyce Carol Oates, as part of a series that makes available out-of-print classics in spirituality. "The last third . . . is disappointingly wasted on mere occultism, but the first part is an important literary achievement" ( LJ
Copyright 1989 Reed Business Information, Inc.