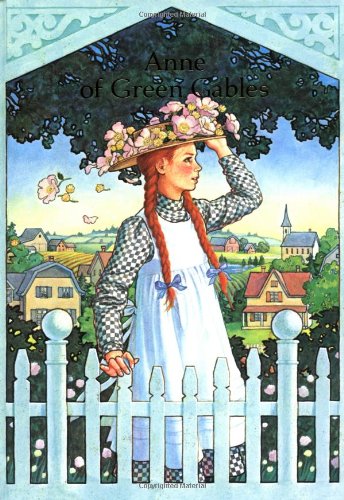 As soon as Anne Shirley arrives at the snug white farmhouse called Green Gables, she is sure she wants to stay forever...but will the Cuthberts send her back to the orphanage? Anne knows she's not what they expected-a skinny girl with fiery red hair and a temper to match. If only she can convince them to let her stay, she'll try very hard not to keep rushing headlong into scrapes and blurting out the first thing that comes to her mind. Anne is not like anybody else, the Cuthberts agree; she is special-a girl with an enormous imagination. This orphan girl dreams of the day when she can call herself Anne of Green Gables.

When Marilla and Matthew Cuthbert of Green Gables, Prince Edward Island, send for a boy orphan to help them out at the farm, they are in no way prepared for the error that will change their lives. The mistake takes the shape of Anne Shirley, a redheaded 11-year-old girl who can talk anyone under the table. Fortunately, her sunny nature and quirky imagination quickly win over her reluctant foster parents. Anne's feisty spirit soon draws many friends--and much trouble--her way. Not a day goes by without some melodramatic new episode in the tragicomedy of her life. Early on, Anne declares her eternal antipathy for Gilbert Blythe, a classmate who commits the ultimate sin of mocking her hair color. Later, she accidentally dyes that same cursed hair green. Another time, in her haste to impress a new neighbor, she bakes a cake with liniment instead of vanilla. Lucy Maud Montgomery's series of books about Anne have remained classics since the early 20th century. Her portrayal of this feminine yet independent spirit has given generations of girls a strong female role model, while offering a taste of another, milder time in history. This lovely boxed gift collection comprises Anne of Green Gables, Anne of the Island, Anne of Avonlea, Anne of Windy Poplars, Anne's House of Dreams, Anne of Ingleside, Rainbow Valley, and Rilla of Ingleside. (Ages 9 to 12) --Emilie Coulter

When Marilla Cuthbert's brother, Matthew, returns home to Green Gables with a chatty redheaded orphan girl, Marilla exclaims, "But we asked for a boy. We have no use for a girl." It's not long, though, before the Cuthberts can't imagine how they could ever do without young Anne of Green Gables--but not for the original reasons they sought an orphan. Somewhere between the time Anne "confesses" to losing Marilla's amethyst pin (which she never took) in hopes of being allowed to go to a picnic, and when Anne accidentally dyes her hated carrot-red hair green, Marilla says to Matthew, "One thing's for certain, no house that Anne's in will ever be dull." And no book that she's in will be, either. This adapted version of the classic, Anne of Green Gables, introduces younger readers to the irrepressible heroine of L.M. Montgomery's many stories. Adapter M.C. Helldorfer includes only a few of Anne's mirthful and poignant adventures, yet manages to capture the freshness of one of children's literature's spunkiest, most beloved characters. There's just enough to make beginning readers want more--luckily, there's a lot more in the originals! Illustrator Ellen Beier creates vibrant pictures to portray the beauty of the land around Green Gables and the spirited nature of Anne herself. (Ages 5 to 8) --Emilie Coulter