Items related to Tom Swift and the Galaxy Ghosts (The New Tom Swift,... 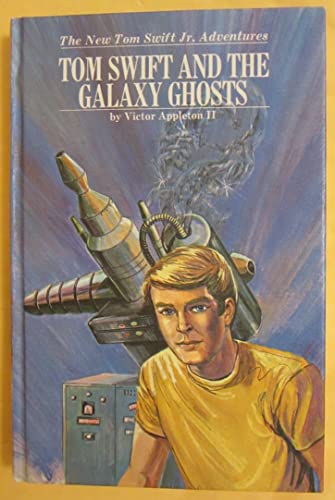 With the help of his latest invention, a device that can atomize objects, send them great distances, and reassemble the atoms, Tom Swift, Jr., and his father locate a frozen mastodon and transport it to the United States.

Victor Appleton II (and his predecessor, Victor Appleton) is the blanket pen name for a group of authors-for-hire who wrote all the Tom Swift novels starting back in 1910. The V.A. II for this Tom Swift Invention Series is a single author who grew up entranced by the world of Tom Swift Jr. He is now quite a long way from being a young reader, but still still remembers the thrill of reading about the famous teen inventor who could do anything from rocketing into space, building robots, communicating with aliens, and creating a road that could float in the air. He now lives in the Pacific Northwest—the author, not Tom!—where his time is divided between writing and being a lazy retired guy. While he hopes that both old and new readers will enjoy the stories, he offers a word of caution: The innocence and naiveté of the original Tom Jr, along with some of the lesser characters, do not appear in these books. Some have been replaced by "stronger" individuals. There are a few people with similar names but this series is not just an add-on to the 1954-1971 books. It takes place in the near future to today that sees our hero more involved in issues concerning all of mankind rather than just building stuff. They are still meant to be enjoyed by readers as young as 8-9 who possess good reading skills, and can be enjoyed by people the author’s own age bracket, that being below, at or above the 60-year mark. A total of at least 20 books are planned with the first 12 written as of December 2013.