Items related to In Name Only

Bieber, Janet In Name Only 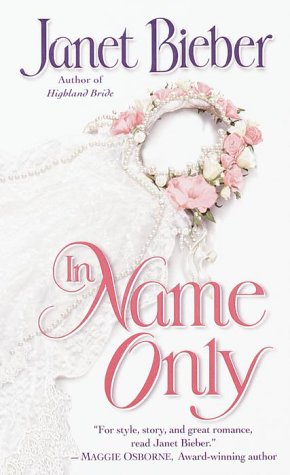 A straitlaced spinster and a rugged ship's captain discover a passion that's anything but proper. . .

THE SAINT. When her sister dies leaving four young children motherless, Valeriana MacPherson becomes determined to care for her nieces and nephews, despite her disapproval of their cigar-smoking, whiskey-drinking rake of a father, Ian Patterson. A shipping captain who refuses to conform to the rules of society, Ian riles her in ways no man ever has and awakens a passion in her that she never knew existed.

THE SINNER. Ian has never been confounded by any woman as much as his prim and proper sister-in-law. The minute Valeriana marches into his house, he is ready to send her packing--until he sees the magic she works on his children . . . and on his own jaded heart. And when her father's cruelty threatens to shatter all their lives, he boldly dares to make her his wife, challenging them both to the most tempestuous battle of all: true love.

Janet Bieber lives in Columbus, Ohio, with her husband and three children. She began her writing career as a coauthor with Joyce Thies, writing under the name Janet Joyce; together they wrote more than twenty romances. She is also the author of Highland Bride.