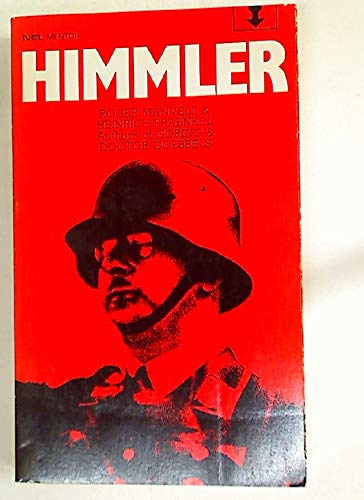 Authors Roger Manvell and Heinrich Fraenkel, notable biographers of the World War II German leaders Joseph Goebbels and Herman Goring, delve into the life of one of the most sinister, clever, and successful of all the Nazi leaders: Heinrich Himmler. As the head of the feared SS, Himler supervised the extermination of millions. Here is the story of how a seemingly ordinary boy grew into an obsessive and superstitious man who ventured into herbalism, astrology, and homeopathic medicine before finally turning to the â scienceâ of racial purity and the belief in the superiority of the Aryan people.

was a critically acclaimed author who received access to new papers of eyewitness accounts of Joseph Goebbels. He co-wrote (with Heinrich Fraenkel)

was a critically acclaimed author who received access to new papers of eyewitness accounts of Joseph Goebbels. He co-wrote (with Roger Manvell)

“Manvell and Fraenkel have produced...biographies of Goebbels, Goering, Himmler, and the men who tried to kill Hitler in 1944....To the best of my knowledge there are no better biographies in existence.” —The New York Review of Books

Book Description Mass Market Paperback. Condition: Good. First Paperback Edition. 304 pages. 160 grams. Book is in good unmarked condition with some wear to cover. 'Heinrich Himmler became the most hated and feared of the Nazi leaders - for it was in his activities as head of the S.S. that Nazism found its most complete expression. Yet his character was strangely at variance with his political role: he was unassuming, pedantic and dull. How, then, could he have been responsible for the mass murder of European Jews and the terrible cruelties which accompanied it? This is the essential contradiction that Roger Man vell and Heinrich Fraenkel reconcile in their masterly biography. Drawing on hitherto unpublished documents, interviews with his family, friends, members of staff and the S.S. they show how HImmler's intensely superstitious nature led him to adopt many eccentric beliefs, culminating in the most dangerous of all - the superiority of the Aryan peoples. Surprisingly, Himmler is revealed not as a megalomaniac or sadist, for he was the perfect bureaucrat - oblivious to the human suffering he caused, but as a weak man possessed by a fanatical dream.' 12mo - over 6Âľ" - 7Âľ" tall. Quantity Available: 1. Category: Non-Fiction, Military; ISBN: 0450003574. ISBN/EAN: 9780450003578. Pictures of this item not already displayed here available upon request. Inventory No: 002576. Seller Inventory # 002576