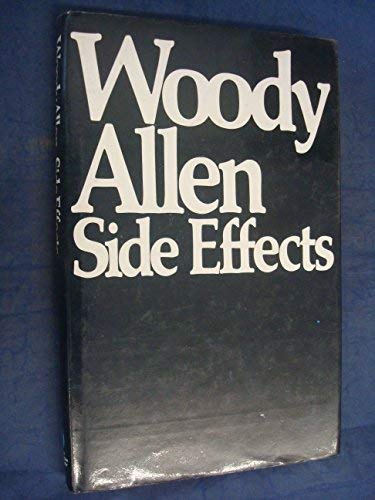 Though not as explosively, mind-alteringly funny as his earlier books, Side Effects is still loaded with chuckles; the much-anthologized "Kugelmass Episode" is worth the price of the book. For fans of his films--or for anyone who wants a final glimpse of Woody in his first, best role as court jester, Side Effects is a must-have. --Michael Gerber About the Author:

Book Description Hardback. Condition: Very Good. The book has been read, but is in excellent condition. Pages are intact and not marred by notes or highlighting. The spine remains undamaged. Seller Inventory # GOR004312770

Book Description Hardback. Condition: Good. The book has been read but remains in clean condition. All pages are intact and the cover is intact. Some minor wear to the spine. Seller Inventory # GOR002339697

Book Description Hardback. Condition: Fair. A readable copy of the book which may include some defects such as highlighting and notes. Cover and pages may be creased and show discolouration. Seller Inventory # GOR007208874

Book Description Condition: Good. DJ may have small chips, scuffs and tears. Book will have been read but remains clean. Cover may have light wear or slight soiling. Pages may be slightly tanned. May contain inscriptions but text pages will be free from markings. Seller Inventory # 9999-9994604366

Shipping: US$ 9.50
From United Kingdom to U.S.A.
Destination, rates & speeds

Book Description Hardcover. Condition: Good. Ex library copy with usual stamps/stickers Good condition is defined as: a copy that has been read but remains in clean condition. All of the pages are intact and the cover is intact and the spine may show signs of wear. The book may have minor markings which are not specifically mentioned. Most items will be dispatched the same or the next working day. Seller Inventory # wbb0017896033

Shipping: US$ 12.94
From United Kingdom to U.S.A.
Destination, rates & speeds

Shipping: US$ 19.60
From United Kingdom to U.S.A.
Destination, rates & speeds