Items related to SIDE EFFECTS 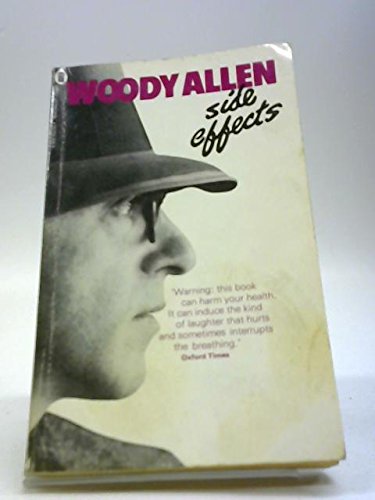 Though not as explosively, mind-alteringly funny as his earlier books, Side Effects is still loaded with chuckles; the much-anthologized "Kugelmass Episode" is worth the price of the book. For fans of his films--or for anyone who wants a final glimpse of Woody in his first, best role as court jester, Side Effects is a must-have. --Michael Gerber About the Author:

Book Description Condition: Good. A+ Customer service! Satisfaction Guaranteed! Book is in Used-Good condition. Pages and cover are clean and intact. Used items may not include supplementary materials such as CDs or access codes. May show signs of minor shelf wear and contain limited notes and highlighting. Seller Inventory # 0450052354-2-4

Book Description Perfect Paperback. Condition: Good. Connecting readers with great books since 1972. Used books may not include companion materials, some shelf wear, may contain highlighting/notes, may not include cdrom or access codes. Customer service is our top priority!. Seller Inventory # S_314238483

Book Description Paperback. Condition: Used; Good. Dispatched, from the UK, within 48 hours of ordering. This book is in good condition but will show signs of previous ownership. Please expect some creasing to the spine and/or minor damage to the cover. Grubby book may have mild dirt or some staining, mostly on the edges of pages. Damaged book. Slightly damaged in some way typically, a grazed corner or torn cover. Seller Inventory # CHL6717750

Book Description Paperback. Condition: Used; Good. Dispatched, from the UK, within 48 hours of ordering. This book is in good condition but will show signs of previous ownership. Please expect some creasing to the spine and/or minor damage to the cover. Aged book. Tanned pages and age spots, however, this will not interfere with reading. Seller Inventory # CHL5608431