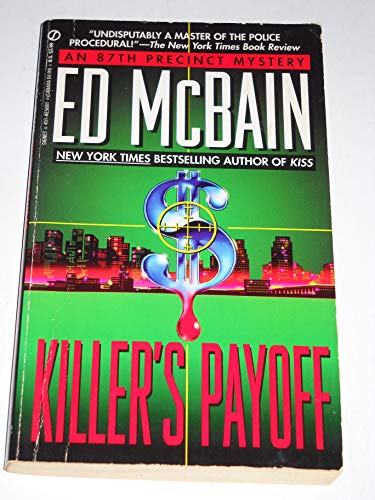 When handsome, well-dressed blackmailer Sy Kramer is found murdered, the detectives of the 87th Precinct must find out which of Kramer's blackmail victims was capable of Kramer's murder

Ed McBain was one of the pen names of successful and prolific crime fiction author Evan Hunter (1926–2005). Debuting in 1956, the popular 87th Precinct series is one of the longest running crime series ever published, featuring more than 50 novels, and is hailed as "one of the great literary accomplishments of the last half-century." McBain was awarded the Grand Master Award for lifetime achievement in 1986 by the Mystery Writers of America and was the first American to receive the Cartier Diamond Dagger award from the Crime Writers Association of Great Britain.

The clothes would have looked different, the women's skirts a little shorter, the men's coats sporting small black-velvet collars, perhaps. The automobiles would have been square and black. The shop windows would have carried the blue eagle of the National Recovery Act. There would have been small differences, but a city does not really change much over the years, because a city is only a collection of people and people are timeless. And the way the automobile came around the corner, it could have been 1937.

The man walking on the sidewalk didn't even look up when the sedan squealed around the corner. He was city-born and city-bred, and the sound of shrieking tires was not an alien sound to him. He walked with nonchalant arrogance, this man, dressed in expensive good taste. He walked with the sure knowledge that all was right with the world, the certainty that he was master of all he surveyed. The automobile squealed around the corner and headed directly for the curb. It pulled up about ten feet ahead of the walking man. The windows on the side facing the curb were open. The engine idled.

The muzzle of a rifle appeared at one of the windows. The man walking broke his stride for just an instant. The person about to fire the rifle was looking through a telescopic sight down the length of the barrel. The distance between the muzzle's end and the walking man was no more than eight feet. There was a sudden blurring flash of yellow, and then a shockingly loud explosion. The man's face erupted in flying fragments; the rifle was pulled back from the window. There was a moment, and then the car gunned away from the curb, tires burning rubber, shrieking into the night. The man on the sidewalk lay bleeding profusely, and the drizzle softly covered him like a shroud.


A pair of green globes straddled the entrance doorway to the precinct. For the benefit of those who might have missed one or another of the globes, the numerals 87 were lettered onto both in black paint. Seven gray stone steps led from the sidewalk to the entrance doorway. Just inside the doorway, the desk sergeant sat behind the high desk, looking like a defrocked magistrate. A sign on the desk warned all visitors that they must stop there before proceeding further. Just beyond the desk and opposite it, a rectangle of wood that had been shaped into a pointing hand and then painted white announced, detective division. The pointing hand indicated a double flight of metal stairs that led to the second floor of the precinct building. The locker room was at one end of the corridor on the second floor. The detective squadroom was at the other end, separated from the corridor by a slatted rail divider. Between the locker room and the squadroom, there were two benches, the clerical office, the men's lavatory, and a room marked interrogation.

The squadroom behind the slatted rail divider was sometimes called the "Bull Pen" by the uniformed cops of the precinct. The title was delivered with affectionate envy, for it was here that the detectives, the Â‚lite, the bulls of the 87th, conducted their business.

On the morning of June twenty-seventh, Detective Bert Kling's business was with a man named Mario Torr.

Torr had come to the station house of his own volition, had mounted the seven gray stone steps, stopped at the desk as requested, asked for the detectives, and been directed to the pointing hand opposite the desk. He had climbed to the second floor of the building, entered the dimly lighted corridor there, hesitated a moment, and then walked to the end of the corridor, where he'd waited outside the railing until one of the detectives had asked him what he wanted. Torr was dressed in ready-to-wear mediocrity. There are men who can make a thirty-five-dollar suit look as if it were handtailored. Torr was not one of these men. He wore his brown sharkskin as if it belonged to his fatter brother. His tie had been picked up in a three-for-a-dollar tie shop along The Stem. His white shirt had been laundered too often. The cuffs and collar were frayed.

There was, in fact, a frayed appearance to the entire man who was Mario Torr. He needed a haircut, and he had not shaved too closely that morning, and his teeth did not look very white or very clean. Worse, he looked as if he knew he was not dapper. He looked as if he had wilted and didn't know how the hell to unwilt.

He sat opposite Kling at one of the desks, and his eyes blinked nervously. He was apparently not too comfortable inside a police precinct, and even less comfortable talking to a detective in a squadroom. He spoke to Kling with the hesitant, distrustful sincerity of a disbeliever on a psychiatrist's couch for the first time. All the while, his eyes blinked and his hands picked imaginary lint from the too clean, spotlessly mediocre, brown sharkskin suit.

"You know his name was Sy Kramer, huh?" Torr asked.

"Yes," Kling said. "We got a positive identification from his fingerprints."

"Sure. I figured you already knew that."

"Besides, he was carrying a wallet with identification. And five hundred dollars in cash."

Torr nodded reflectively. "Yeah, he was a big spender, Sy was."

"He was a blackmailer," Kling said flatly.

"I told you we identified him from his prints, didn't I?"

"You figure this for a gang kill?"

"It looks that way," Kling said.

"Does that mean you'll just let it drop?"

"But you're starting with gang stuff, huh?"

"We've got a few feelers out," Kling said. "Why? Are you selling information, Torr? Is that why you're here?"

"Me?" Torr looked seriously offended. "Do I look like a stoolie?"

"I don't know what you look like. Why are you here?"

"Well, we shot a game of pool together every now and then. Who'll be working on this case?"

"Detectives Carella and Hawes caught the squeal. It's their case. The rest of us'll help if we're needed. You still haven't told me why you're here, Torr."

"Well, I don't think this was a gang kill. The papers said a hunting rifle got him. Is that right?"

"Does that sound like a gang kill? Listen, I asked around. Nobody had anything against Sy. There was no beef. How could there be? He was a loner. He never got involved with any of the racket boys. Blackmail you do alone. The more people who know, the more ways you've got to split."

"You seem to know a lot about it," Kling said.

"So it's my idea that one of Sy's marks -- you know, somebody he was giving the squeeze -- decided it was time to get rid of him. That's my idea."

"Would you happen to know who his marks were?"

"No. But they must've been big. Sy always had plenty of money. A big spender he was, Sy." Torr paused. "Do you? Know who the marks were, I mean?"

"No," Kling said, "but of course we'll look into it. I still don't know why you're so interested, Torr."

"He was my friend," Torr said simply. "I want to see justice done."

"You can rest assured we'll do everything in our power," Kling said.

"Thanks," Torr said. "It's just cause he was my friend, you understand. And I think you're taking the wrong approach with this 'Gangland Murder' garbage the newspapers are printing."

"We have no control over the press, Mr. Torr," Kling said.

"Sure, but I wanted you to know what I thought. Cause he was my friend, Sy was."

"We'll look into it," Kling said. "Thanks for coming up."


The first thing Kling did when Torr left the squadroom was to call the Bureau of Criminal Identification.

The bureau was located at Headquarters, downtown on High Street. It was open twenty-four hours a day, and its sole reason for existence was the collection, compilation, and cataloguing of any and all information descriptive of criminals. The I.B. maintained a Fingerprint File, a Criminal Index File, a Degenerate File, a Parolee File, a Released Prisoner File, a Known Gamblers, Known Rapists, Known Burglars, Known Muggers, Known Any-and-All Kinds of Criminal File. Its Modus Operandi File contained more than 80,000 photographs of known criminals. And since all persons charged with and convicted of a crime were photographed and fingerprinted, as specified by law, the file was continually growing and continually being brought up to date. The I.B. received and classified some 206,000 sets of prints yearly, and it answered requests for some 250,000 criminal records from police departments all over the country. When Kling asked for whatever they had on a man named Mario Torr, the I.B. dug into its files and sent Kling the photostated tickets before noon.

Kling was not at all interested in the fingerprints that were in the envelope. He scanned them rapidly, and then picked up the copy of Mario Torr's sheet.


There was in the Penal Law a subtle distinction between extortion and blackmail.

Section 850 defined extortion as "the obtaining of property from another, or the obtaining the property of a corporation from an officer, agent or employee thereof, with the consent, induced by a wrongful use of force or fear, or under color of official right."

Such was the nature of extortion.

Blackmail was extortion in writing.

Section 856 of the Penal Law stated that "A person who...causes to be forwarded or received...any letter or writing, threatening: 1. To accuse...2. To do any injury...3. To publish or connive at publishing any libel...4. To expose...," etc., is guilty of blackmail.

The distinction was indeed a subtle one in that blackmail had to be in writing, whereas extortion could be either oral or written. In any case, Torr was both a convicted extortionist and an accused blackmailer.

Kling shrugged and looked through the rest of the photostated material in the I.B.'s packet. Torr had served a year at Castleview, the state's -- and possibly the nation's -- worst penitentiary. He had been released on parole at the end of that time, after receiving a guarantee of employment from a construction company out on Sand's Spit. He had in no way violated his parole. Nor had he been arrested again since his prison term had ended. He was, at present, still gainfully employed by the same Sand's Spit construction company, earning good wages as a laborer.

He seemed to be a decent, upright, honest citizen.

And yet he was interested in the apparent gangland murder of a known blackmailer.

And Bert Kling wondered why.