Items related to Breakfast at Tiffany's: A Short Novel and Three...

Breakfast at Tiffany's: A Short Novel and Three Stories 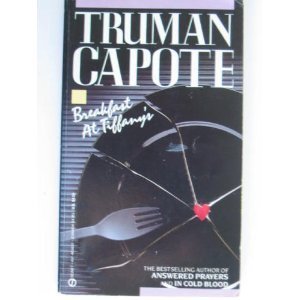 This is a story that was first published in 1958. This wacky hillbilly-turned-playgirl who lives in a Manhattan brownstone shares not only his philosophy of freedom and acceptance of human irregularities but also his fears and anxieties--'the mean reds' she calls them. For her the cure is to jump into a taxi and head for Tiffany's; nothing bad could happen, she says, amid 'that lovely smell of silver and alligator wallets, '' and her dream is to have breakfast in that soothing setting.

The Modern Library has played a significant role in American cultural life for the better part of a century. The series was founded in 1917 by the publishers Boni and Liveright and eight years later acquired by Bennett Cerf and Donald Klopfer. It provided the foundation for their next publishing venture, Random House. The Modern Library has been a staple of the American book trade, providing readers with affordable hardbound editions of important works of literature and thought. For the Modern Library's seventy-fifth anniversary, Random House redesigned the series, restoring
as its emblem the running torch-bearer created by Lucian Bernhard in 1925 and refurbishing jackets, bindings, and type, as well as inaugurating a new program of selecting titles. The Modern Library continues to provide the world's best books, at the best prices.

1. Breakfast at Tiffany's: A Short Novel and Three Stories