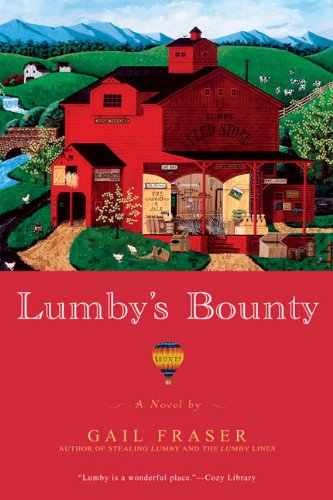 Book #3 of the Lumby series.  What Garrison Keillor did for Lake Wobegon and Jan Karon did for Mitford, Gail Fraser has done for Lumby - a town so heartwarming and endearing, you'll be forever transported.  Tucked into the foothills of the Rockies lies the charming village of Lumby, where quirky but tolerant townsfolk usually make the best of any situation.

How Lumby has come to host a hot-air balloon festival is a long story (thanks to a couple of bored teenage entrepreneurs seeking some adventure), but the town's residents embrace their responsibilities and jump right into the preparations. And the monks of St. Cross Abbey bring a visitor from a distant land to help solve Lumby's one seemingly insurmountable challenge: to build and crew the lead balloon in the festival.  After trial balloons wreck humorous mayhem across the county, Kai Talin and the mayor's unassuming wife join forces and soon have The Bounty floating gently above the fairgrounds.

While Pam and Mark Walker lend a hand while juggling their own challenges at Montis Inn, love grows between Kai and the daughter of the town matriarch. But can the improbable relationship survive?  And can Hank overcome his acrophobia--after all, for a pink flamingo who believes he's a bald eagle, it would be an embarrassment if he didn't ride along on The Bounty's maiden voyage?  In true Lumby tradition, blue skies and smooth sailing are always expected but not always guaranteed.

Although many reviews have compared my novels to those written by Jan Karon, Garrison Keillor and Phil Gulley, I personally try to stay clear of comparing and contrasting one author or series to another.  What I can say, though, is that Lumby -- its valleys, streets, townsfolk and stories -- is an escape...a gentle, quirky sanctuary from life's harsher realities. At the heart of the town is the decency, levity and honorableness of good people who are carving out the best lives they know how.  It is a town that is reminiscent of yesteryear, a community as it was intended to be--caring, forthright, ethical and authentic.  And within that wonderful place, humor is a mainstay and an antidote (as I think it is in life) where the moral compass always points due north unless someone has dropped it in the PortiPotty at the county fair. With the help of the two well-intentioned inn keepers, the monks from Saint Cross Abbey (who make a tremendous rum sauce), a trustworthy newspaper publisher and a cast of unforgettable characters along Main Street, Lumby has a place in all of our hearts.

From Christian Book Previews:  "The Lumby Lines goes straight to the heart. The simplicity, humor, and downright friendliness make reading it a pleasure.  Readers will close the book with a sigh of contentment and a desire to visit Lumby again. The author has faithfully carved out a slice of small-town living and topped it off with a large helping of humor. This reviewer can't wait for her next visit to Lumby!"

Gail Fraser is the author of the Lumby series, which includes "The Lumby Lines," "Stealing Lumby," "Lumby's Bounty," "The Promise of Lumby," "Lumby on the Air" and "Lost in Lumby."  Along with her husband, folk artist Art Poulin, Gail also co-authored the celebrated non-fiction illustrated hardcover and ebook entitled "Finding Happiness in Simplicity: Everyday Joys for Simple Living Throughout the Year" (Globe Pequot 3/2012).

Prior to changing her life and becoming a novelist in 2004, Gail had a long and successful career in 'corporate America' holding senior executive and upper management positions in several Fortune 500 and start-up corporations. During her career, in addition to living throughout the United States, Gail traveled to 22 countries and had extended stays in Australia, Japan, Brazil and several countries in Europe.

Gail was born and raised in Rye, New York, and attended the Rye High School and then majored in English and received an AA from Colby Sawyer College. After graduating, Gail studied at the University of London and returned to Skidmore College where she earned her BA in English Education. She completed her MBA at the University of Connecticut, with graduate work done at Harvard University.

Gail and Art have built their own 'Lumby' at Lazy Goose Farm in rural upstate New York. Featured in several magazines, newspapers and on PBS, Lazy Goose is a 40-acre gentleman's farm that is demarcated by a 200-year old stone wall, and has views of the Catskills, Adirondack and Vermont mountains. Gail is also an avid heirloom tomato gardener, long-distance swimmer and flute player. When not following her passions, Gail tends to their orchard and beehives most every morning.