Items related to The Bishop: The Bowers Files

The Bishop: The Bowers Files 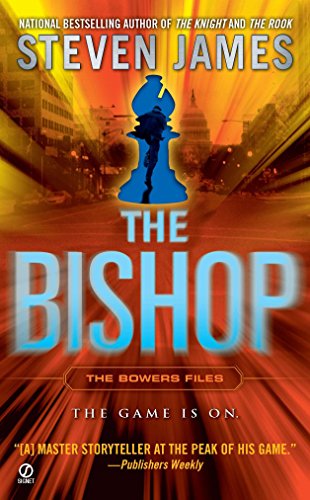 FBI Special Agent Patrick Bowers's cutting-edge 21st-century geospatial investigative techniques and impeccable logic have helped him track some of the country's most grisly killers. But those skills are pushed to the limit in this new installment of the highly-acclaimed, award-winning The Bowers Files series. This time it's a congressman's daughter who is found dead even as her killers launch a spree of perfect murders in the Northeast.
With nothing to link the crimes to each other, Agent Bowers faces his most difficult case yet--even as his personal life begins to crumble around him.Known for his intricately woven, masterfully plotted novels of high-octane action and spine-tingling suspense, Steven James delivers once again.
The Bishop is a gripping, adrenaline-laced story for readers who are tired of timid thrillers. Strap on your seatbelt and get ready for a wild ride. The game is on.

While I was writing the Bishop, I was able to tour the FBI Academy in Quantico, VA. So all of the information about the inside of the academy is as accurate as I was able to be without giving any inside information away.
When I began the book, I wanted to have the entire story take place over the course of 52 hours. However, as I worked on it, I realized that this wouldn't allow me to build up the suspense I wanted to throughout the story.
While writing the climax, I abandoned a rudimentary outline that I had started and wrote it organically, solidifying in my mind the realization that outlining was not for me and would end up wasting my time.
I didn't know who the bishop would be until I was completing the final chapters of the book.

The game is on.

FBI Special Agent Patrick Bowers's cutting-edge skills are about to be pushed to the limit. When a young woman is found brutally murdered in Washington DC, her killers continue a spree of perfect crimes in the Northeast. But with nothing to link them to each other, Agent Bowers faces his most difficult case yet--even as his personal life begins to crumble around him.

The Bishop is a gripping, adrenaline-laced story for readers who are tired of timid thrillers. Strap on your seat belt and get ready for a wild ride.

What everybody is talking about

"Be warned--James's books are not for the timid."--Mitch Galin, producer, Stephen King's The Stand

"As thrilling and unexpected as any five-star action movie."--John Tinker, Emmy-award-winning writer

Critically acclaimed author Steven James has written more than twenty books, including the bestselling thriller series The Bowers Files. One of the nation's most innovative storytellers, Steven developed his skill as a performer at East Tennessee State University (MA in storytelling). He lives in Tennessee with his wife and three daughters.

1. The Bishop: The Bowers Files

2. The Bishop: The Bowers Files

3. The Bishop: The Bowers Files

5. The Bishop: The Bowers Files

6. THE BISHOP: THE BOWERS FILES